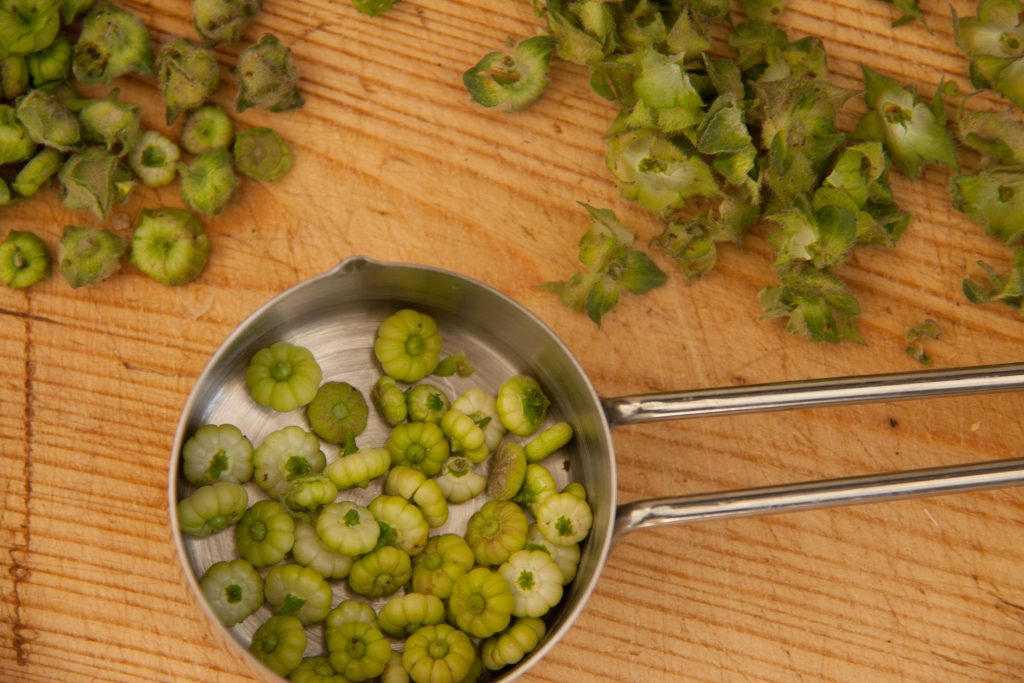 I enjoy surprising friends with foraged foods, and nothing I’ve made has surprised people more than these sweet, light, mallow meringue cookies, made from the seeds of a common weed. I won’t lie, it’s a labor-intensive recipe. But it’s totally worth doing, not only for the flavor and wow factor, but also because the transformation from seed to dessert feels a little like magic and who wouldn’t want to experience that?

The recipe was inspired by Dr. John Kallas’s mallow-mallow recipe. His book, Edible Wild Plants, is essential for every serious forager. If you’re a forager and you don’t already own it, you should.

I’ve made this recipe with the seeds of both Malva sylvestris and M. neglecta. It’s likely that whatever common mallow weed is growing near you will produce seed pods with similar mucilaginous properties.

Some people call these mallow cheeses because they resemble tiny little wheels of cheese. Others call them mallow peas. (Why? They neither look nor taste like peas.) Whatever you call them, these seeds contain lots of useful mucilage. You’ll find them where the flowers used to be, where the leaves join the stems of the plant.

If you’re using the seed pods in a savory preparation, there’s no need for this step. The calyces add a vegetal flavor to the final product, and since this is a sweet recipe, you’ll need to remove each seed pod from its surrounding calyx. It’s a tedious job, and one that’s best accomplished in the company of friends and fellow foragers. Time passes much more quickly when you can peel and chat at the same time.

Measure your peeled seed pods. Because peeling is so labor intensive, I usually work with only 1/4 cup. This is plenty for a batch of meringues. In a saucepan, combine three parts water for every one part mallow seeds, then bring the water to a boil. Boil until the liquid volume is reduced by half. Sometimes you’ll notice the liquid thickening to the consistency of egg whites, sometimes this change won’t be visible. It’s reassuring to see it happen but don’t worry if you don’t. (I freaked out unnecessarily.) When the liquid has reduced, strain the mallow seeds from the liquid and set them aside. (Taste one when it’s cool, and if you like the flavor, add them to a salad.)

Measure the strained liquid. For every 1/2 cup you’ll need:

Using a large spoon or rubber spatula, transfer the mixture to a one gallon zip lock bag and seal. Cut a corner off the bottom of the bag; this will be your dispenser. Squeeze small dollops (about the size of a quarter) of the mixture onto the silicon mats of your dehydrator. (Sorry, this is one recipe where you can’t substitute a low oven for a dehydrator.)

Set your dehydrator to 110F and start drying. Depending on the ambient humidity and the power of your dehydrator, your mallow meringues will be ready in 3 1/2  – 4 hours. They are most delicious when they’re fresh, but they’re pretty darn good even after a week…if they last that long.

If you’d like to save some for later, powder the cookies to prevent sticking. Combine one part confectioner’s sugar with three parts cornstarch in a paper bag, then drop in a few cookies at a time, and shake to cover them with powder. Powdered mallow meringues will keep for several weeks in a closed glass jar.

The mallow meringues will get drier with time. While they may be slightly chewy at first, after a few days, you’ll find they disintegrate in your mouth, at the slightest touch of your tongue. It’s an explosion of foraged deliciousness that’s well worth the effort.