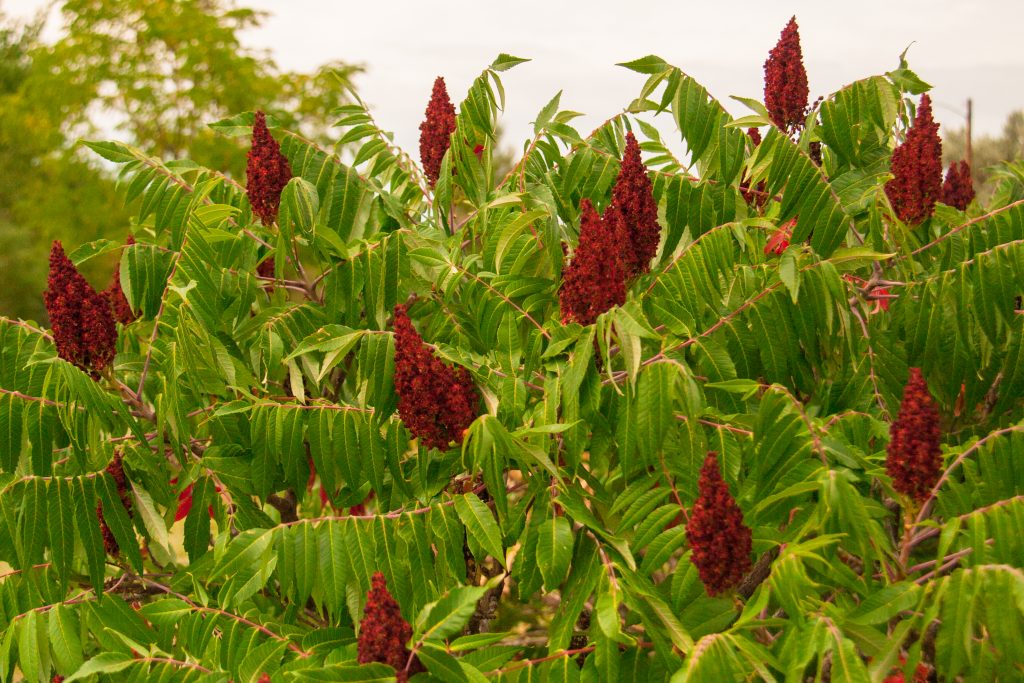 Every year, along about mid-summer, I get anxious.

While farmers in the Midwest are worrying about their corn crop, I’m wondering if the sumac will be good this year and if I’ll get enough. Because if it isn’t, and if I don’t, well, then what? (And don’t say order sumac powder from Kalustyans because even though I could do that, I would feel the deep shame a forager feels when she has not adequately harvested an important crop. And besides, paying for sumac is like paying for, well, you know.)

Before you ask or warn me about sumac being poisonous, let me explain. Yes, there is such a thing as poison sumac, but it’s a pretty rare plant, growing primarily in wetlands. It’s also easy to differentiate between poison sumac and edible sumacs. Poison sumac has loose clusters of white berries that emerge from between the leaves. Edible sumac has red fruit borne in terminal clusters (i.e. only at the ends of branches). There are several types of edible sumac in the U.S. including smooth sumac (Rhus glabra), staghorn sumac (R. typhina), and three leaved sumac (R. trilobata). All produce red berries with varying degrees of sourness.

While some people eat the young shoots of sumac stems, I’m not impressed enough by the flavor to repeat the experience. I’m in it for the berries. The tart, red berries.

Sumac gets its lemony taste from a combination of acids that coat the fruit. These acids are washed away by rain, so gather your sumac as soon as possible after the berries ripen. The acids re-accumulate after each rain, but the berries become progressively less tart (and tasty) with each successive downpour.

Timing is key when it comes to harvesting sumac berries. Their color deepens before the flavor fully develops, so you can’t rely on a visual cue to know when to harvest. I start tasting sumac as soon as it’s bright red, monitoring its developing tartness. By mid-July I’m antsy. Hot, dry weather intensifies the sourness of sumac fruit, but every day I wait to harvest is a day when a torrential summer rain might wash away all that deliciousness.

Another reason not to wait too long is that large sumac cones (like those of smooth and staghorn sumac) are often colonized by caterpillars. Let’s just say this makes them substantially less appetizing.

When you can’t stand it any longer, harvest your sumac by cutting off whole cones where their stems join the branch. Cones can be dried by placing them in a paper bag and hanging them somewhere dark and dry for 2 – 4 weeks. Or, break apart the cones and dry them at 95F in your dehydrator. Dried sumac should last for a year or two in an airtight jar.

If you’ve ever tasted za’atar, you’ve probably tasted sumac. The Middle Eastern species of sumac, R. coriaria, is a primary ingredient in this popular spice blend. You can easily make your own with local sumac and a few favorite herbs, or use dried sumac alone to add a dash of tartness to any dish, like these sumac steamed buns.

Sumac-ade is a popular summer beverage among foragers. Break apart several cones of berries and soak them in two quarts of room temperature water until the liquid turns pink. You can speed up the process by stirring or shaking the container. Most foragers agree that cold brewing produces a tastier beverage. Boiling water can release bitter tannins in the sumac seeds, making the drink overly astringent.

Taste your sumac-ade periodically to test for sourness, then strain off the solids. You can run unsweetened sumac-ade (sugar will clog the machine) through a Sodastream if you don’t mind voiding your warranty. Or, if you have a soda siphon, you can carbonate sweetened sumac-ade. It makes a lovely cocktail mixer.

And speaking of cocktails, macerate sumac fruit in gin, rum, or vodka to create a foraged cocktail. Be sure to use a jelly bag, coffee filter, or cheesecloth to strain your sumac-infused spirit before using. You’ll want to remove the seeds, and if you’re using staghorn sumac, the hairs that coat the fruit.

Here in PA the sumac is bright red, but we’ve had a lot of rain. I taste the berries every day but they’re not nearly good enough to pick. Thunderstorms are predicted for Wednesday. I’m feeling a little anxious.