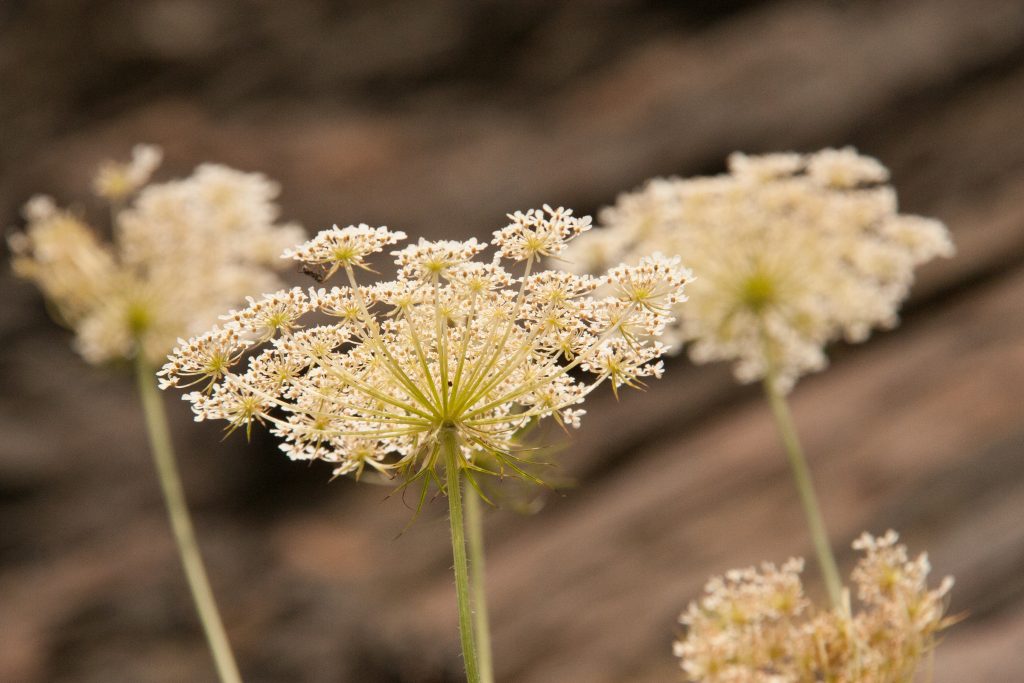 The queen has hairy legs.

Queen Anne’s Lace is a member of the carrot family, Apiaceae. Foragers know: you don’t mess around with the Apiaceae. It includes a number of highly poisonous plants, so understanding how to safely identify the edible members of this plant family is very important. Fortunately, Queen Anne’s Lace is easy to recognize when you know what to look for.

First of all, check for a solid stem, covered with hairs. Both poison hemlock and water hemlock (two of the plants some people confuse with QAL) have hollow, smooth stems, so once you confirm solid, hairy stems, you can rule out the poisonous look-alikes. Additionally, the stems of QAL are green, while the stems of poison hemlock are splotched with purple, and often covered with a white bloom you can wipe away with your fingers.

Second, look for older flowers of Queen Anne’s Lace, which curve up and in upon themselves to form a bird’s nest shape. Young QAL flowers are flat umbels. (An umbel is a flower cluster where multiple small flowers are borne on stems originating from a central point.) As the flowers age, and fruits begin to develop, the flower folds in upon itself. This bird’s nest shape is another important i.d. characteristic for QAL.

Some, but not all QAL umbels have a single dark flower at the center of the umbel. You can remember that by saying that Queen Anne pricked her finger while making lace and the dark flower is a drop of her blood. Or you could just remember it without the hokey story. Your choice.

I don’t usually load you up with i.d. characteristics, because this blog is not intended to be a field guide. But Queen Anne’s Lace has several poisonous look-alikes, and you must be 100% sure you’ve got the right plant before you work with it. This is not a plant for beginning foragers. If you’d like more technical specs on the plant, see here.

Once you know the plant, and can recognize it without hesitation, QAL is a versatile wild edible with several tasty parts. Its common name wild carrot is accurate but also misleading. The common garden carrot is very closely related to QAL. Its botanical name is Daucus carota subspecies sativa. Same genus, same species, but a different subspecies.

You may read that the roots of first year QAL (this plant is a biennial) can be used the same way you’d use carrots, but I think that’s wishful thinking. Queen Anne’s Lace roots are small and woody, and even after extended boiling, they are too fibrous to be pleasant eating. Use it as an aromatic in soups and stews, but as a flavoring only, to be removed before serving.

The foliage of QAL has a fresh, vaguely carroty flavor. You can use it instead of parsley.

Queen Anne’s Lace jelly is made from an infusion of the flowers, and I postponed making it for years, because fellow foragers described it as merely sweet, without a distinctive flavor. Since distinctive flavors are my primary interest, I wasn’t tempted. But this summer curiosity got the better of me, and I decided to dip my toe in the QAL jelly pool. I was pleasantly surprised by the flavor…but that’s another post.

Flowers are followed by small green fruits, which dry to be brown and hard. Dried fruits have a mild, caraway flavor, and can be used as a spice. Grind them to release maximum flavor. I haven’t worked with the green fruits yet, but my pal Butter says they’re flavorful, like a combination of parsley and citrus. That sounds pretty tasty to me, so I’ll be giving them a try as soon as possible.

Many people think the dried fruits are seeds, but they aren’t. Inside each fruit are two seeds, which are released when the fully ripe, dried fruit splits open. QAL seeds have been used historically as both birth control and as an abortifacient, so do not eat them if you are pregnant or trying to conceive.