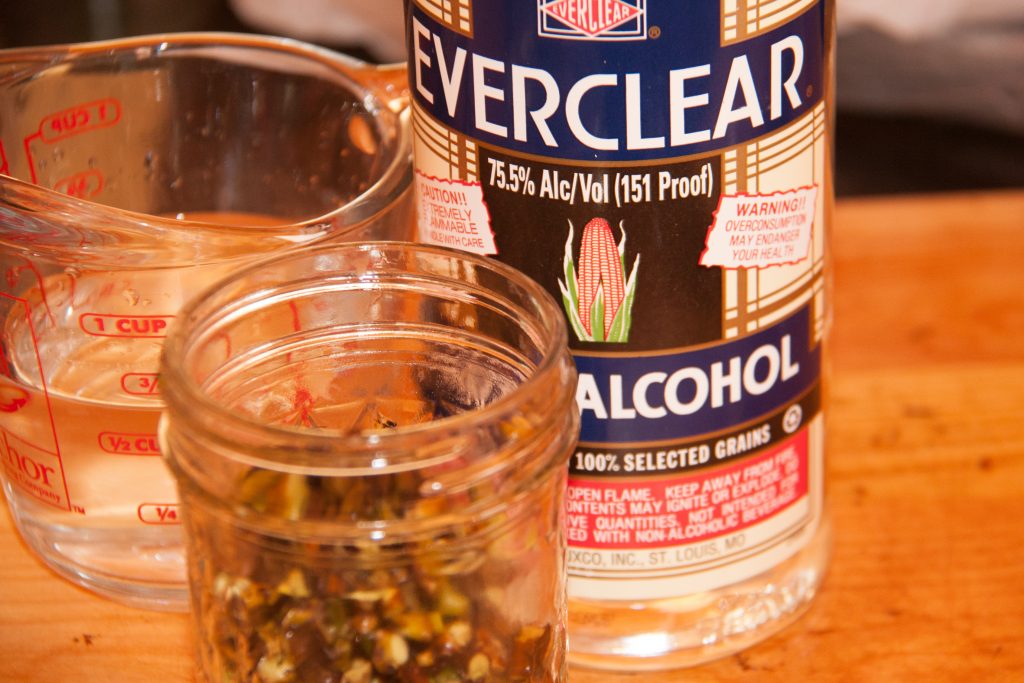 What do bitters do? What purpose do they serve in a cocktail? When I first became obsessed with cocktails, I didn’t know the answer to that question. I knew bitters were originally conceived of as a medicinal, digestive stimulant but I didn’t understand that bitters lend dimension to a cocktail, adding a complex finishing touch. They temper the sweetness of a cocktail made with simple syrup and add a savory, aromatic note to a fruit-based drink. If you’re making a “sour” (a cocktail with raw egg whites made frothy by shaking them in a cocktail shaker), then a dash of bitters will keep those egg whites from smelling like wet dog. (Yes. It’s a thing.)

There are two schools of thought on homemade bitters making: You can macerate each ingredient individually, then combine the resulting tinctures to form your own bitters blend, or you can let your ingredients steep together. I’ve tried both, but generally I prefer the latter. When the ingredients have a chance to blend in the jar, something unpredictably synergistic happens. I like that.

The general rule for making bitters is that the liquid (a neutral grain spirit) is measured in fluid ounces and the solids are measured by weight. The ratio of liquid to solid should be 2:1 if you’re using fresh ingredients and 4:1 or 5:1 if you’re using dry ingredients. So, for example, 8 fluid ounces of liquid would require 4 ounces (by weight) of fresh solids or 2 ounces of dried solids. (Dried herbs, spices, and mushrooms have more concentrated flavors since the water has been removed, which is why you need less of them.) Of the total solids, 1/2 of them should be the bitter ingredient.

The bitter ingredient in commercial bitters is often gentian root or chinchona bark, both of which have intensely strong, dark, bitter tastes. My foraged bitters generally have a lighter flavor, because the bitter ingredients I can forage for locally aren’t quite as strong as gentian or chinchona. You’ll probably want to use 8 or 10 drops per cocktail, which is slightly more than you’d use of commercial bitters.

Some easy-to-find and plentiful bitter components that most of us can forage for include dandelion root, mugwort root, Oregon grape root, burdock root, yellow dock root, chicory root, and horehound foliage.

In addition to the primary bitter ingredient, I use foraged fruits, herbs, and spices, and a touch of sweetener at the very end. When you sweeten your bitters, remember, less is more. You’re not aiming for an end result that is palatable on its own. Bitters are always used in conjunction with something else (a cocktail, a glass of seltzer) and should be composed with this in mind.

While commercial bitters often have long lists of ingredients, I prefer to use only 3 – 5 in my foraged bitters, so the flavor of each ingredient can be truly appreciated. Feel free to add more ingredients and tweak your recipes as you become a more experienced bitters maker.

Everclear 151 is my macerating liquid of choice. It’s neutral in flavor and because it has an ABV (alcohol by volume) of 75% it makes for some easy math. The ABV of commercial bitters is usually 37-45%. With Everclear 151, when it’s time to dilute your bitters solution to an appropriate ABV, just add an equal amount of water-based solution and there you are at 37.5%…easy as pie.

Admittedly, brewing bitters requires some playing around; you have to be willing to experiment with different flavors and you will definitely need to drink a few cocktails along the way. Are you willing to make that sacrifice? Then let’s get started.

What You’ll Do to Make Foraged Bitters:

Combine the Everclear, your bitter ingredient of choice, juniper berries, and crabapples in a glass jar. The liquid should just cover the top of your solid ingredients. If you need to add a little more Everclear to make that happen, that’s fine. Just keep track of what you do, so you can repeat your successes and avoid repeating any mistakes.

Cover the jar and let it sit for at least two weeks out of direct sun. Give the jar a good shake once a day. Taste the liquid after two weeks and if the flavor isn’t quite strong enough, let it sit another week. Once you can taste the foraged ingredients, strain off the solids and set them aside.

At this stage the bitters will not be delicious. Most of what you’ll taste will be alcohol, because we’re only half way there.

Measure the alcohol and put it aside. You won’t have a full eight ounces any more. The solids will have absorbed some alcohol.

Measure out twice as much water as you have alcohol into a small saucepan, and add the strained solids, then bring the mixture to a boil. Reduce the heat and allow the liquid to simmer for ten minutes. Remove the liquid from the heat, cover, and let it sit overnight. Then, strain off the solids, thank them for their service, and throw them away.

Measure the liquid and for every four ounces add one teaspoon of sugar. Gently warm and whisk to dissolve the sugar, then remove the liquid from the heat and allow it to cool.

Combine equal parts of the alcohol- and water-based liquids, and voila! You have bitters at the perfect ABV of 37.5%. If you’re feeling fancy, transfer your bitters into little bottles with droppers. This not only makes them easier to use, but they make very cute gifts.

The ingredients in this bitters recipe give you a place to start, but feel free to substitute what you can forage for locally. Just remember to keep the proportions approximately the same: half of the plant material should be the bitter ingredient, and the remainder split between fruit and spice. If you want a few more starter recipes, you can find them in my book: The Wildcrafted Cocktail.

Foraged bitters capture the flavors of a unique place and time, and preserve them in high proof alcohol. These are unbuyable flavors you can’t find in a store. That makes them priceless in my book.