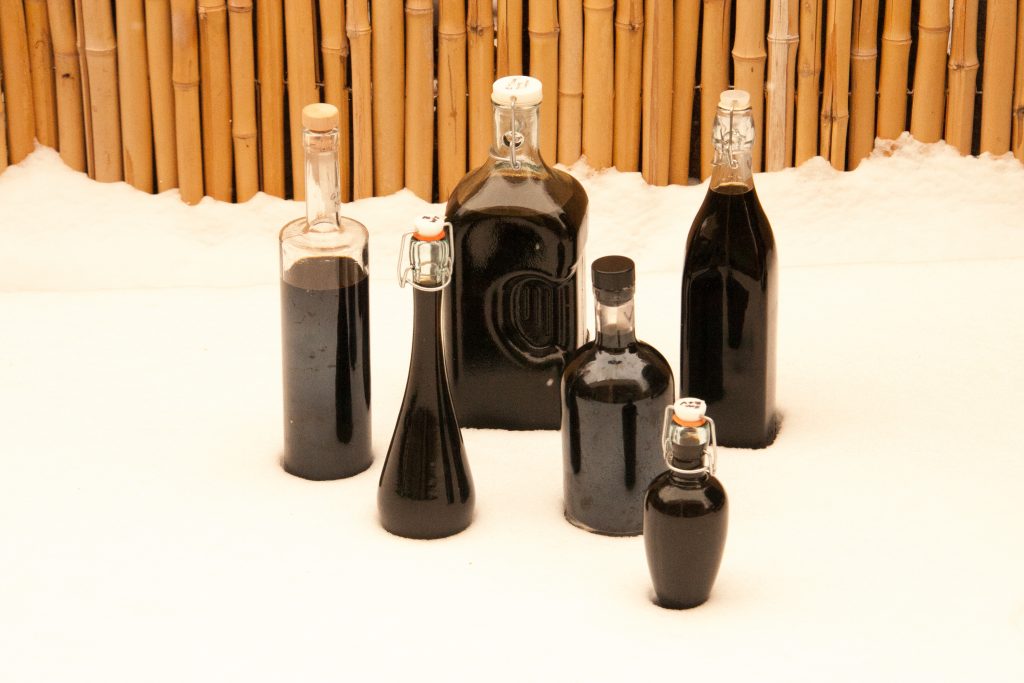 While most people think of nocino as a traditional Italian digestif, the recipe actually originated in Britain. The Picts (a Celtic tribe from Scotland) were known to become euphoric after drinking it, and I get that. They harvested green walnuts at the summer solstice, and at the same time celebrated the new green walnut harvest by drinking the previous year’s brew. Legend has it that the Romans took the recipe for nocino back to Italy when they left Britain behind.

You can make nocino with any kind of walnut, as long as it’s green, as in unripe. I have friends in CA who use CA walnuts. The Picts used English walnuts (that’s a guess). Black walnuts (Juglans nigra) are most plentiful in PA, and they make a terrific nocino. The important thing is not what kind of walnut you use, but that the walnuts are young enough NOT to have developed a hard shell beneath the green husk. You should be able to slice through them with a sharp knife. To test your walnuts, use a knitting needle or metal skewer. If you can push it through the entire nut with little or no resistance, you’re good to go. Depending on where you live, the walnuts will be at the right stage in May or June.

Black walnut juice stains your hands, and young nuts are super-juicy. Stains last for about a week, so either wear latex gloves to avoid the mark of the black walnut, or, wear your walnut-stained hands as a badge of honor.

Traditional Italian nocino recipes include spices like cinnamon, vanilla, star anise, and cloves. For my foraged version I use a combination of wild spices. What you use will depend on what grows near you; feel free to experiment. I tinker with my herb choices and amounts every year, depending on what I have on hand.

Nocino can be served plain, over ice, in a cocktail, in marinades, or (wait for it) poured over ice cream. That’s right. This recipe makes approximately one gallon. And no, that is not too much. If your walnut harvest is small, you may scale the recipe down. But that is the only reason to make less than the full recipe. Listen to me now and believe me later.

What You Need to Make Nocino

What You’ll Do to Make Nocino

Put the nuts and spices in a 1-gallon jar, stir to combine, cover with the alcohol, place the lid on the jar and give it a good shake. Let the alcohol infuse for 40 days in a cool, dark place. The liquid will quickly change from clear to almost black.

Strain out the solids and throw them away. Measure the liquid and combine with an equal amount of simple syrup. Let this combination sit for three months, in one or more sealed containers.

Strain the liquid through a fine coffee filter and pour into bottles. The nocino is ready to drink now, but its flavor will improve over the next six months. It’s hard to wait, but you should at least pretend to try.