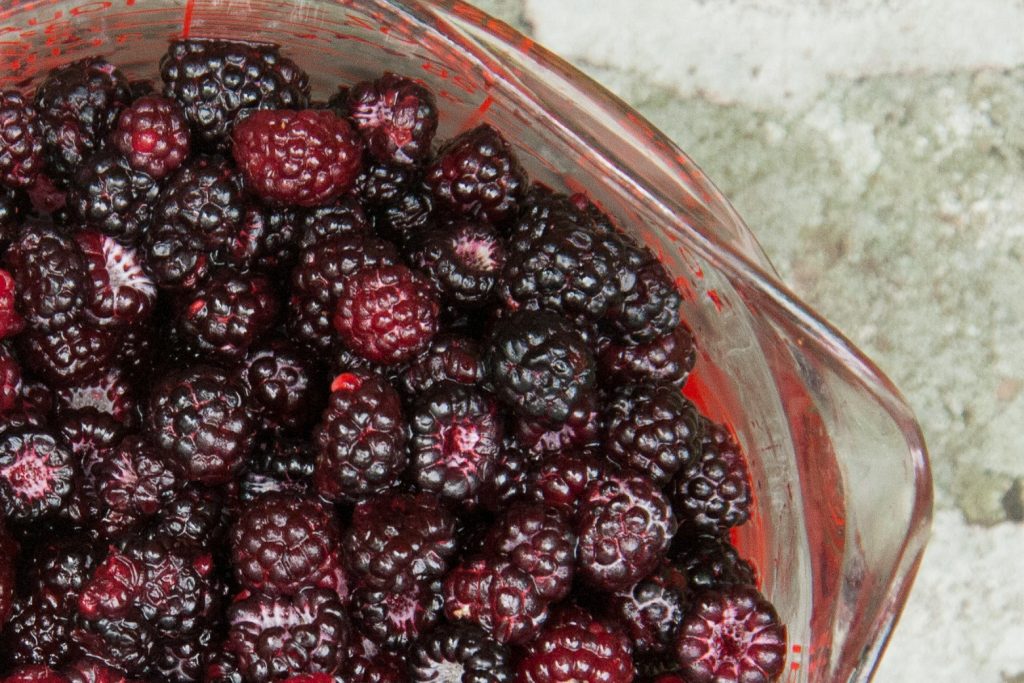 Did you know that black raspberries and blackberries are entirely different fruits? Both are cane fruits, producing berries on thorny, arching stems (called canes). Both are members of the Rubus genus, which also includes raspberries and wineberries (and dewberries and boysenberries and cloudberries, among others). And all bramble berries (Rubus species) are aggregate fruits. Each bump on the berry is actually an individual fruit that is part of an aggregate berry.

That’s what they have in common. But what’s the difference between black raspberries and blackberries?

Blackberries are large (up to 1 1/2 inches long), coarsely bumpy, and they ripen in late summer. Their thorns are large and curved and have an uncanny ability to grab onto human flesh and never let go. Blackberries have a solid white center.

Black raspberries are smaller than blackberries, usually no bigger than your thumbnail. They have a hollow center which is visually obvious once the berry has been picked. Also, the bumps on the outside of the fruit are smaller than those of blackberries. Black raspberry thorns, while definitely grabby, aren’t quite as committed to drawing blood as blackberry thorns are. The flavor of the two fruits is also quite different, with black raspberries being sweeter and more delicate.

There are two species of black raspberries common to the United States. R. occidentalis is native to the East Coast and R. leucodermis is native to western North America. The two species look and taste very much alike. A third species, R. coreanus is found in China, Korea, and Japan. Another common name for black raspberries is black caps. I’m not sure why, because they are WAY too small to wear on your head.

How To Harvest Black Raspberries

Black raspberries have an interesting growth habit. The crown of the plant is perennial, but the canes are biennial. Canes grow vegetatively the first year; the second year they flower, fruit, and die. This means you’ll only harvest fruit from second year growth.

When black raspberry fruit is ripe, it practically falls off the cane into your hand. Black raspberries ripen gradually in mid summer, over a period of two to three weeks. It’s worth checking your black raspberry spots once a week to maximize your harvest.

Like red raspberries, black raspberries are a delicate fruit. They’ll keep for a day or two in the refrigerator, but can be preserved longer by freezing. Wash the fruit by soaking it briefly in water. Running the berries under a faucet may break the fruit, so soak it instead of rinsing it, then drain the berries on a paper towel. When they’re dry, spread the dry berries in a single layer on a cookie sheet covered with wax paper, and freeze. When the fruit is frozen, transfer it to ziplock bags for long term storage. Blackberries can be cleaned and preserved in the same way.

Black raspberries are a versatile fruit. They’re delicious straight off the cane, but if you can resist eating them all while you pick, try them in jams, jellies, cobbler, pie, sorbet, ice cream, and for a French twist try a black raspberry clafoutis. Blackberries can be used in all the same ways, but remember, their flavor, size, and season are slightly different. I hope you enjoy them both as much as I do.