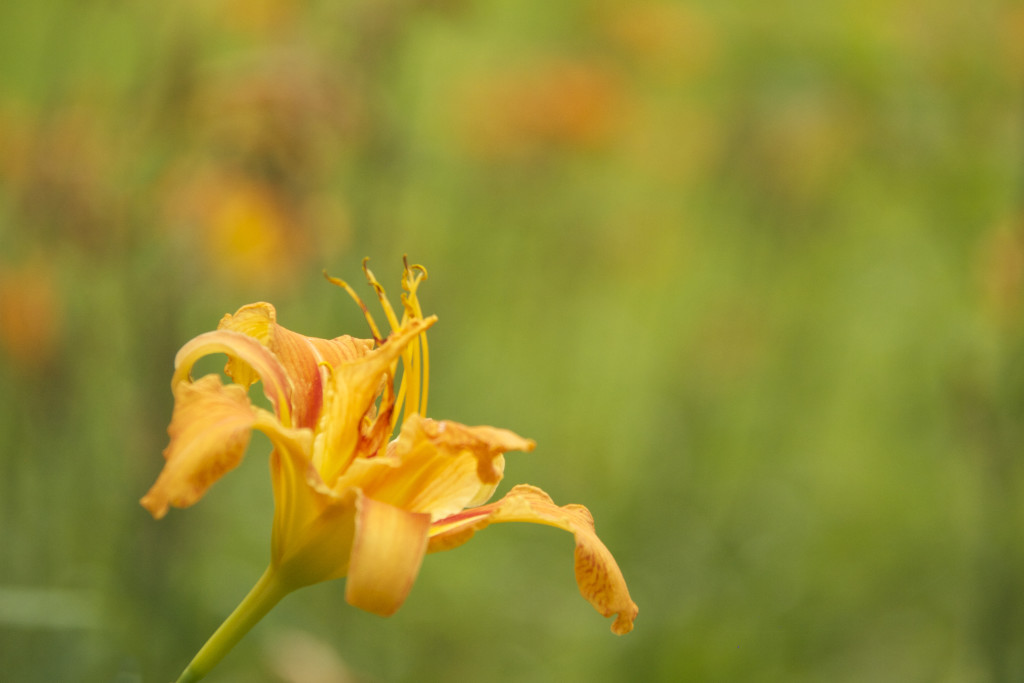 Daylilies are wild food superstars, providing four different edible parts during the growing season. I’d be hard pressed to choose which part is my favorite, so don’t try to pin me down.

As garden plants, daylilies are outrageously popular. Entire plant societies are devoted to the daylily, but most gardeners appreciate the plant only for its looks, not its culinary potential. Just so you know, daylilies are not true lilies. They were probably given that common name because their flowers superficially resemble those of true lilies, but true lilies are members of the genus Lilium, while daylilies are in Hemerocallis. There are thousands of daylily cultivars, and while some (or many) of them may be edible, my experience is only with the straight species: Hemerocallis fulva.

N.B. I’ve read a few reports of people having allergic reactions to eating daylily tubers. I don’t know anyone personally who’s had this problem, but if this is your first time eating daylilies, start small. That’s a wise approach to any new food, be it foraged or purchased.

As a garden plant, Hemerocallis fulva requires division every few years to keep it flowering well, so when it’s time to divide, keep a few tubers for the kitchen. And if you don’t want to dig up your own, take a walk around the neighborhood. Daylilies often outgrow their garden boundaries and it’s not unusual to find masses of this under-appreciated edible plant growing wild in fields and along roadsides. In fact, an alternate common name for the daylily is ditch lily.

Oh Noble Ditch Lily, how do I love thee? Let me count the ways. (In order. Through the growing season.)

First Way I Love Daylilies (actually, I only like them this way)
While beginning foragers may think daylily leaves look like iris leaves (iris foliage is NOT edible) there are two obvious differences. First, daylily foliage is a pure green while iris foliage is more blue-green and glaucous. Second, iris foliage is flat and emerges from the rhizome in a fan-like arrangement, while daylily leaves emerge in opposite pairs and are folded in half at the base.

Collect young shoots until they’re about five inches long; after that they’re too fibrous. Snip off the stems at ground level and don’t worry, they’ll grow back. Daylily shoots make a crisp spring vegetable. They’re mild and crunchy and make a fresh side dish.

Second Way I Love Daylilies (again, I like them this way)
As the name indicates, the flowers of daylily last for a day. After the bloom opens (flowers will be freshest early in the day) pick a few flowers and remove the pistils and stamens (the sex parts!). Daylily petals can be used dry or fresh. Crumble dry leaves into rice or pasta to impart an orange yellow color. Fresh leaves add color to salads. The petals are pretty but not especially flavorful.

Third Way I Love Daylilies (now this is love)
Unopened buds can be harvested from the time they’re an inch long and entirely green, until they’re three inches long and showing color. Now we’re talking flavor.

You can add them raw to salads, where the crunch and taste are reminiscent of green beans. They also make excellent pickles. My favorite way to eat daylily buds is lightly sautéed in olive oil with salt and pepper. In Chinese cuisine daylily buds are an ingredient in classic hot and sour soup.

Fourth Way I Love Daylilies (again, true love)
In fall or early spring, daylily tubers are plump and full of stored starches. Dig up a clump and remove about half of the tubers. Be sure to replant what you’re not going to cook with. Clip the root hairs off the tubers, then clean them well. No need to peel them before eating, but you’ll probably need to wash them in several changes of water. Daylily tubers look (and taste) a lot like fingerling potatoes. Coat them in olive oil, salt, and pepper, then roast at 450°F. The texture will resemble those of lower starch, waxy (red bliss) potatoes, not fluffy (russet) potatoes. Daylily tubers also make an excellent, crisp pickle. No need to cook them first, just pour your brine over the tubers, then process for ten minutes in a boiling water bath.

Daylilies are a great wild edible for beginning foragers: plentiful, tasty, and easy to identify. Truly a plant that feeds both body and soul. Once you’ve tried them, you’ll never look at a daylily the same way again.

Previous Post: « How Much Do You Want those Unbuyable Flavors?
Next Post: The Dirty Lily Bud Martini (a foraged adult beverage) »