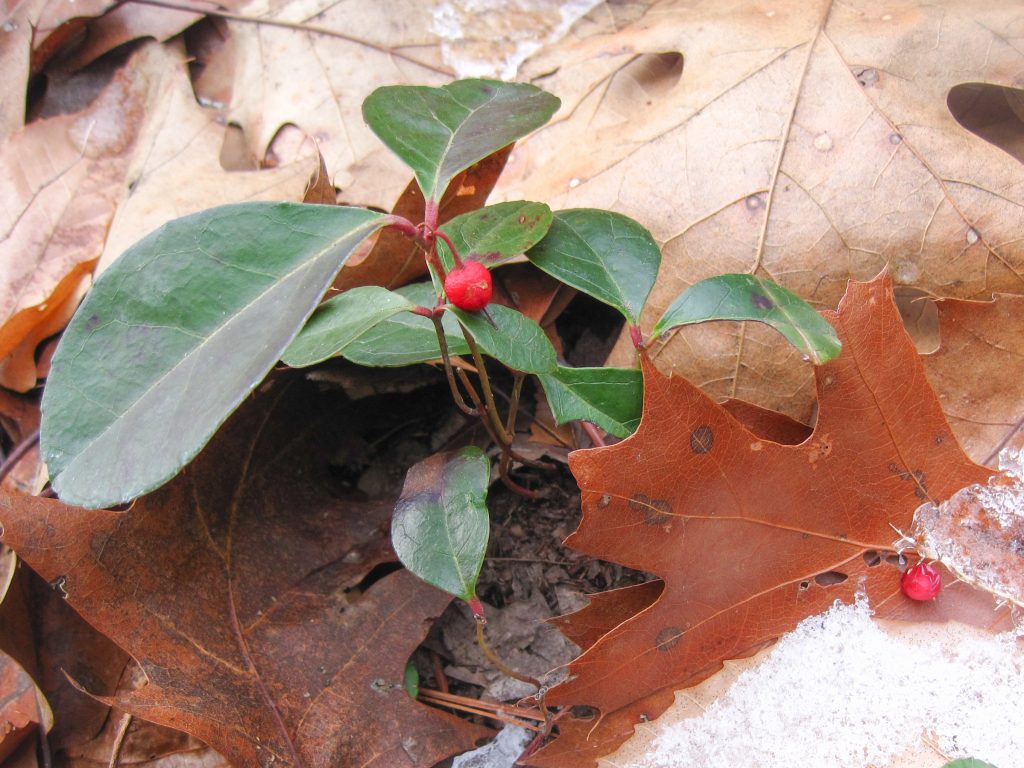 If you’ve ever tasted teaberry gum, you already know the flavor of wintergreen. It’s a subtle, minty flavor, more complex and sophisticated than peppermint or spearmint. Wintergreen was once such a popular tea plant that it was given the common name teaberry (hence the name of the gum). I prefer to use it in ice cream and cocktails, both of which I find exponentially more interesting than tea. However you use wintergreen, here’s what you need to know.

Most people think of wintergreen as a ground cover, but it’s actually a very small shrub. It thrives in acid soils, and you’re likely to find it growing near blueberries and mountain laurel. Wintergreen is a slow grower, producing an average of two to five glossy green leaves, and one to three berries per year.

Wintergreen spreads by underground rhizomes and often forms large clumps. Since it’s a small plant, it’s easily hidden by other, taller plants during the growing season. But in late fall, when deciduous vegetation dies back, the shiny, evergreen leaves of wintergreen are easy to spot.

Warning: The characteristic flavor of wintergreen comes from methyl salicylate, a chemical related to the active ingredient in aspirin. People with aspirin allergies should not consume wintergreen. You may also (if you’re an avid googler) find internet warnings about the toxicity of wintergreen oil. I wouldn’t ever want you to do anything that makes you nervous, but if you’re curious or skeptical, like me, do a little more research.

All the studies I’ve found were done with pure, steam-distilled, wintergreen oil, not with food and beverages made from the plant itself. There is no reason to believe that a serving of wintergreen ice cream or a cup of wintergreen tea will be dangerous for anyone who doesn’t have an aspirin allergy.

Unfortunately, anyone who just pops a wintergreen berry into their mouth will most likely get a poor impression of the plant. The berries look very appealing, but their texture is mealy, and most people spit the fruit out. (I do.) To fully enjoy the essence of wintergreen, focus on the foliage.

Wintergreen foliage can be harvested any time of year. In cold weather, the leaves may have a red tint which adds its color to whatever you make with it. (Bonus!) Snip a leaf from each plant, leaving several leaves behind so the plant can continue to photosynthesize.

To get the most flavor out of wintergreen leaves in a water-based solution, you’ll need to allow the plant tissue to break down a little. Fill a jar with leaves, add room temperature water, and cover the jar. Allow the foliage to macerate for three to five days. Taste the liquid, starting on day three, to check the strength of the wintergreen flavor. This can be used as a tea (if you must) or as the base for a sorbet.

If you’d like to make wintergreen ice cream, consider making wintergreen extract first, then using that to flavor your ice cream.