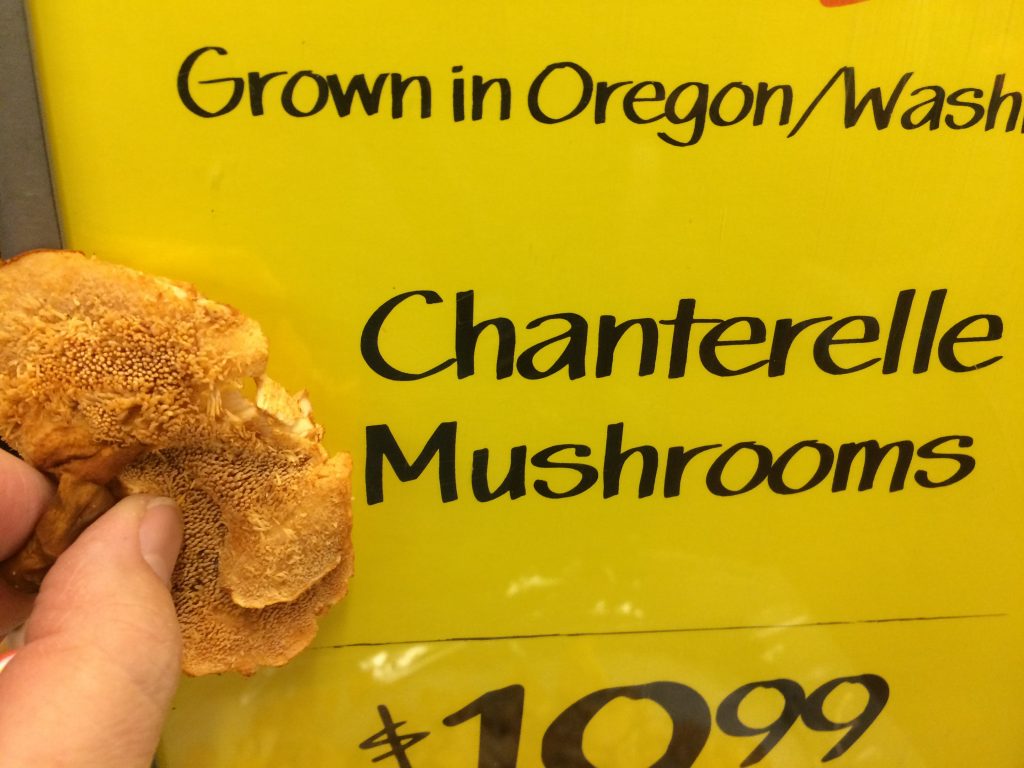 I don’t shop at Whole Foods regularly, but my sister does. She texted me before Thanksgiving, excited to tell me she’d bought chanterelles for us to cook and share. Imagine my surprise to find that the mushrooms Whole Foods was selling as chanterelles were, in fact, nothing of the sort. Fortunately, they were another edible mushroom, so no danger of poisoning here, but still… Shouldn’t we expect more from a respected national retailer? (That’s a rhetorical question. The answer is yes.) Ah, but it gets worse. This wasn’t an isolated incident, and Whole Foods has chosen NOT to correct the problem.

I couldn’t let this rest, so I went to the store (15 Washington St., Brighton, MA) and had a pleasant conversation with the woman at the service desk. She asked me to show her the incorrect sign, which I did. I also showed her how to differentiate between a chanterelle, which has gills, and what they were selling: Hydnum repandum aka sweet tooth mushrooms, aka hedgehogs), which have teeth. As any mushroomer knows, these two mushrooms are astonishingly easy to tell apart.

I gave her my business card, told her I had published two books on wild edible plants and mushrooms, and said she was welcome to contact me with any follow-up questions. I also told her that the price was right for sweet tooth mushrooms, and reassured her that sweet tooth mushrooms were both tasty and non-toxic. When I left the store, she was standing at the display, talking with two employees, presumably discussing the error and preparing to change the signage. Or so I thought.

After posting about this on FB, I learned I wasn’t alone in finding bad mushroom signage at Whole Foods. A friend on Long Island sent this photo of morels mislabelled as shiitakes. Again, two edible mushrooms, so no danger of toxicity, but 1) Whole Foods could charge A LOT more for morels than for shiitakes, and 2) those two mushrooms look nothing alike!

It makes you wonder, doesn’t it? Clearly we can’t trust Whole Foods to correctly identify the mushrooms they buy, and clearly they shouldn’t be trusting or purchasing from any vendor who can’t tell the difference between a chanterelle and a sweet tooth. How long will it be before a mistake isn’t merely annoying, but is actually dangerous? Will they purchase Jack O’Lanterns labelled as chanterelles? A mistake like that will do much more than irritate people like me.

I’ve contacted corporate at Whole Foods with my concerns, but it’s been a week and I’ve heard nothing back. Except, mystifyingly, an email survey this morning asking if I’m satisfied with my interaction with the Whole Foods Customer Care Team. I’ve informed them there has been NO interaction, and that I am far from satisfied. I’ve also told them I’m surprised by their lack of concern about food safety and incorrect labelling.

Should I have been less pleasant and more demanding when I spoke with the service person in the store? I had every reason to believe she’d take me seriously. Should I have bombarded Whole Foods with my credentials? I expected my business card to do the trick, but perhaps I should have used words like Harvard, expert, food safety, and potential lawsuit. I’m not so naive as to think a national retailer actually cares about its customers, but I expect them to care about their reputation and bottom line, and this type of mistake does nothing to help either of those things.

The next time you find yourself at Whole Foods, wondering how you can possibly trust their signage, know that you can’t. If you’re a forager, you’ll spot their mistakes without much trouble. But if you’re not a forager and you love wild mushrooms…how can you be sure you’re getting the right thing? Everyone makes mistakes, but there’s no excuse for not correcting an error when it’s brought to your attention, especially where food safety is concerned.

ADDENDUM: I received a call from the Brighton Whole Foods, apologizing for the mistake and explaining why it happened. While I appreciated the call, it did nothing to make me more comfortable with the quality of their labelling, since the explanation placed the blame squarely on the shoulders of an inadequately trained employee.