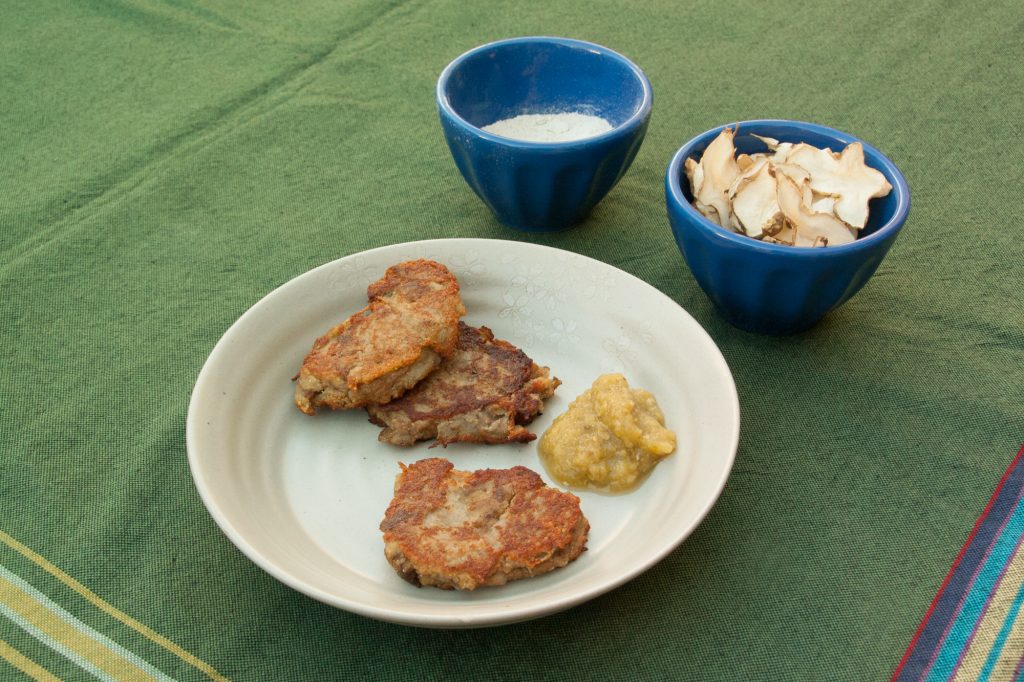 Is it a fritter? Is it a pancake? It doesn’t matter! The important thing is that the flavor is superb, and that’s what you’re here for, right? These Jerusalem artichoke fritters combine the silky texture of sunchokes with the unbeatable umami of mushroom powder to make an irresistible side dish. Bonus: it’s low on the glycemic index, and therefore a healthier carb choice for people with blood sugar issues.

I’ve made Jerusalem artichoke fritters before, using shredded sunchokes. They were crispy and delish. But this time I wanted to flavor them with mushroom powder, and I thought a smoother batter would work better so I tried mashed sunchokes.

My first attempt failed. Mashed sunchokes are much looser than mashed potatoes, and they fell apart in the frying pan. My second attempt was only marginally better. Adding an egg helped, but the fritters still didn’t hold together as well as I wanted. After consulting with the lovely and talented Butter Wilde, I sliced up more sunchokes and put them in the dehydrator overnight. A few pulses in the spice grinder and I had a quarter cup of sunchoke flour to help those fritters stick together.

You may or may not need the flour, depending on how much moisture is in your sunchokes. This will depend not only on their growing conditions, but also on how long and how they’ve been stored. Sunchokes that have been in the crisper drawer of your refrigerator for a few months will be drier than sunchokes dug fresh from your October garden. If you don’t need the flour to get your fritters to stick together, don’t use it. But it’s a good idea to have it on hand, just in case. And yes, you could use any flour as a binder, but since I have A MILLION Jerusalem artichokes right now, and since I didn’t want to dilute their flavor, sunchoke flour was my first choice. Plus, now I can serve this to all my diabetic and gluten-intolerant friends.

One more thing about Jerusalem artichokes: I don’t peel them and I’m not sure why anyone does. The skins are much thinner than those of potatoes so there’s no textural issue, especially when you’re puréeing the tubers. Also, I’ve read that they are the most flavorful part of the tuber. No. I haven’t tested this myself because it means peeling a whole bunch of sunchokes and eating only the skins. Not only does that sound weird (here, have a bowl of sunchoke skins), but the main reason I don’t peel my sunchokes is because they are super-knobby and a real PITA to peel. Leaving the skins on gives you a slightly darker end product, but the mushroom powder in this recipe also darkens the tubers, so I say save yourself some time and leave the peels on.

What You’ll Do to Make Jerusalem Artichoke Fritters

Cut your sunchokes into chunks, no more than 1 1/2 inches large. Put them in a sauce pan, cover them with water, and bring to a boil. Let them simmer for 15 minutes, or until you can easily pierce one with the tines of a fork. Do not overcook! Cooking too long will liquify the sunchokes and you’ll have a hard time getting your fritters to stick together.

Move the cooked tubers to a bowl and let them cool. (This is important because adding egg to hot tubers will give you bits of cooked egg in your fritters.)

In a separate bowl, lightly beat the egg, then add the mushroom powder and thoroughly incorporate it into the egg. Add the caramelized onion purée and combine well.

When the tubers have cooled, lightly mash them with a potato masher, then gently incorporate the egg paste. You don’t want to overwork the batter or it won’t hold together well. Scoop out a spoonful of batter and evaluate. If it falls apart, add flour, a tablespoon at a time, until your batter holds its shape. You shouldn’t need more than 1/4 cup.

Evenly coat the bottom of a frying pan with your preferred cooking oil and bring it up to medium heat. Use a tablespoon or ice cream scoop to plop a fritter-sized amount of batter into the oil. It should start sizzling immediately. If it doesn’t, wait a little longer before starting the next one.

Fritters will need 3-5 minutes to turn brown and crispy on the first side. Flip them over, and let them cook another 2-3 minutes on the second side for optimum caramelization. The insides will be warm and silky soft.

You can serve Jerusalem artichoke fritters plain, or with your favorite salsa. And now that I think of it, a fried egg on top of one of these babies would make a pretty tasty breakfast.