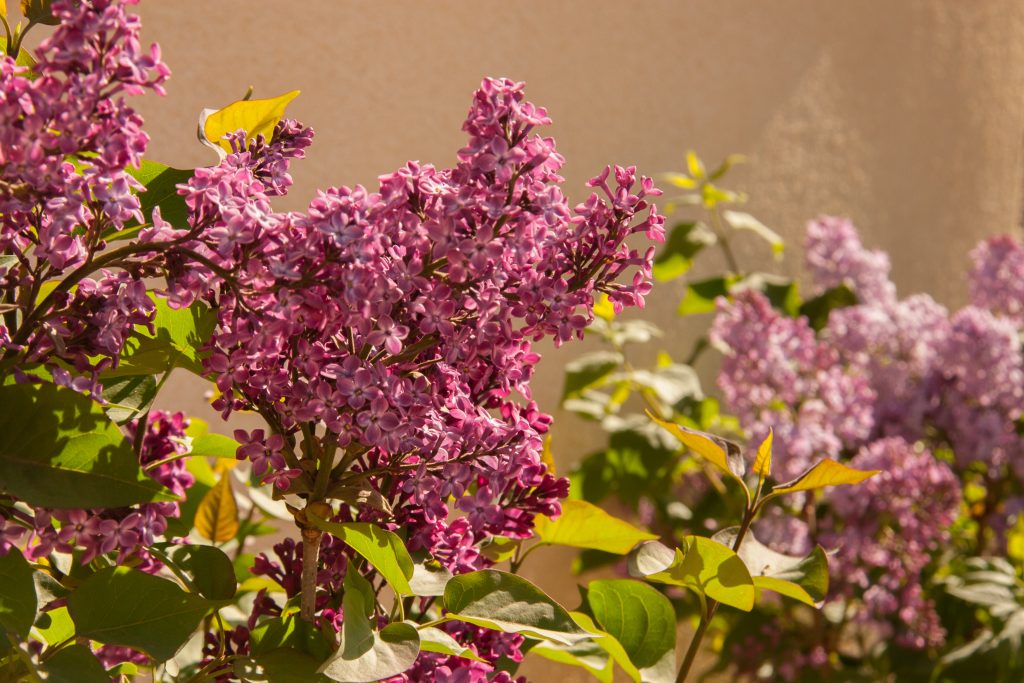 Crème de violette is a classic cocktail ingredient with a floral perfume and a deep purple hue. It’s a lovely liqueur, but I’m obsessed with the lilac, and not just because it’s the state flower of New Hampshire (where I was born and raised!). Inspired by Hunger & Thirst’s recipe for crème de violette, I’ve come up with a lilac liqueur. Lilac flowers lose their purple color in the liquid, (and I refuse to bastardize this beverage by adding color!) but when you open the bottle, the unmistakeable perfume of spring lilacs wafts past your nose on its way down your throat.

There’s no cream in crème de lilac (or in crème de violette). The silky texture comes from its high sugar content. It’s smooth and sweet, and delicious on its own or mixed in a foraged cocktail.

WHat You’ll do to Make lilac Liqueur

Gather your lilacs when the blooms are fully open. Be sure to taste a floret or two from each shrub before harvesting, and reject any that are bitter.

Remove the florets from the flower heads, because their small, individual stems can have a bitter taste. It’s ok if a few of the floret stems make it into the brew, but do the best you can to get rid of the green parts.

Put two cups of lilac flowers in a one-pint canning jar, then fill the jar with vodka or another neutral spirit that’s at least 80 proof (40% abv). Steep the flowers for six hours, then strain off the liquid and dispose of the flowers. Refill the jar with two more cups of flowers, and pour the infused vodka back into the one-pint jar. Steep for another six hours, then strain the liquid again and throw away the flowers. Fill the jar one more time, with another two cups of flowers and the infused vodka. After six more hours, strain the vodka and pour it into a clean glass jar. Dispose of the flowers.

Does this sound like too much work? Trust me, it’s worth it. I tried a side by side comparison of the thrice-infused vodka and compared it with a single, eighteen-hour infusion. I tasted both brews, and Michael did a blind taste test. We agreed that the eighteen hour soak was somewhat bitter and not nearly as tasty.

While the flowers are soaking in alcohol, take another half cup of flowers and put them in a jar. Add a cup of sugar, and shake it around to combine, then cover the jar and set it aside for three days.

Transfer the sugar and flowers to a saucepan, then add a half cup of water. This makes a rich syrup, as opposed to a simple syrup, which would be equal parts sugar and water. Slowly bring the syrup to a low boil, whisking constantly, and let it simmer for  a few minutes. Then, remove it from the heat and let it cool overnight. Repeat the slow simmer the next day, then let the syrup cool to room temperature. Strain the syrup off the flowers, then thank the flowers for their service and say goodbye.

You should have about a cup of syrup. Combine equal parts syrup and vodka in a jar. You’ll notice that the vodka floats on top of the syrup at first. This is due to the difference in the densities of the two liquids, and it looks kind of cool. Shake the jar to combine the two liquids, seal the jar, and stash it somewhere cool and dark, where you won’t be tempted to taste it until it’s ready.

I confess, I tasted my liqueur after just a few days. It was nice but not what I had hoped for. So I put it back in the pantry and waited another two weeks. What a difference! The flavor and perfume are subtle but distinct, and the color is a rich, deep gold. Try it straight or over a single cube of ice.