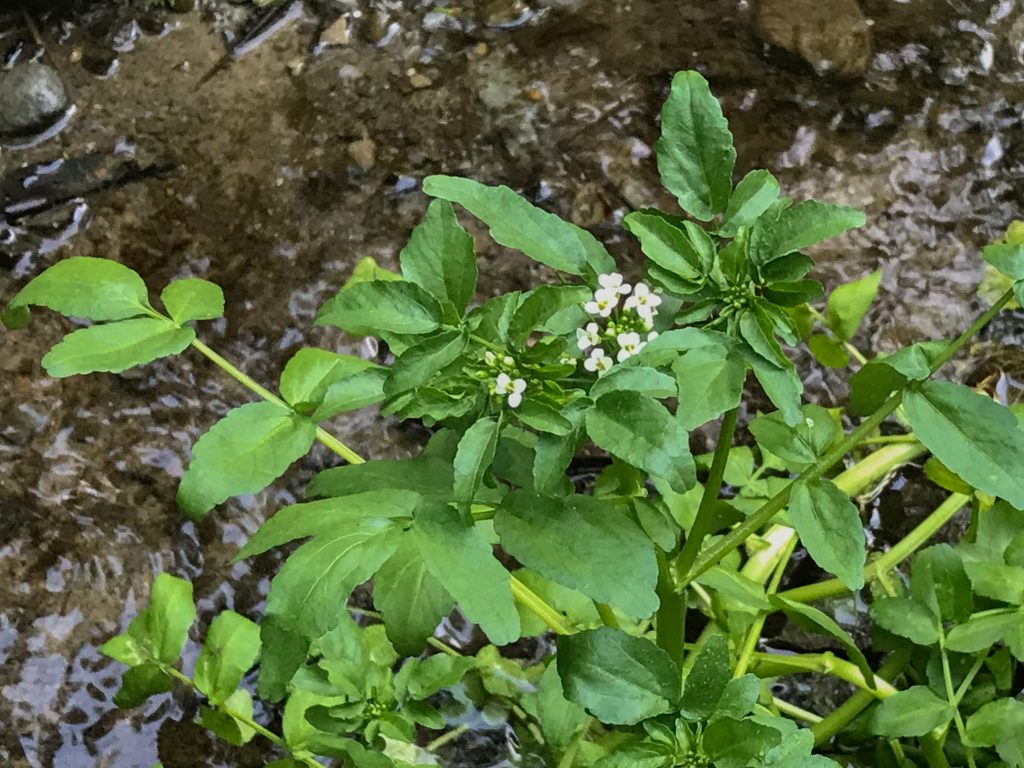 I love watercress for many reasons. The flavor is great, it’s super nutritious, extremely versatile, and it has a very long season. You can often forage for it in the middle of winter, as long as the water it grows in hasn’t frozen.

Watercress is in the mustard (aka Brassicaceae) family, along with familiar vegetables like broccoli and Brussel sprouts, and like most members of this plant family, it has a strong flavor. Its stems and leaves have a sharp peppery taste, reminiscent of horse radish, but less harsh.

Look for watercress in cool, slow moving streams. It’s a perennial plant with leaves 3-6 inches long, divided into 5-11 lobes. Small white flowers are four-petaled, and while I have heard people claim that the leaves turn bitter after flowering, this has not been my experience. Perhaps this is because my secret watercress spot is in deep shade. Plants growing in sun may be more bitter.

Watercress is an aquatic plant with hollow stems. It spreads easily, often covering a stream for an acre or more, and it’s shallow-rooted, so you can dig up a few plants and transplant them to your very own, cool, slow moving stream at home. But don’t plant them in a pond; watercress needs to be grown in moving water in order to thrive.

If you’re planning to harvest, not transplant, don’t pull watercress up by the roots. Simply snip the stems off just above water level, or pinch off the stems with your fingers. The plant is quite tender and easy to harvest with your bare hands. The leaves, flowers, and stems are all edible.

If you do a little research, you’ll read that wild watercress isn’t safe to eat raw. If the water the cress grows in contains animal waste, it may also contain parasites like the liver fluke.These parasites can take up residence in the human liver and the consequences aren’t pretty. If you plan to cook the watercress, no problem. Boiling the plant for a few minutes kills the parasite and renders it harmless. If you have your heart set on a raw watercress salad, you have a few options. You can soak the plants in water with iodine tablets (the kind used by backpackers for purifying drinking water), or you can harken back to my initial instructions about picking the stem above the water level.

The stage of the liver fluke that lives on water plants is immobile (encysted). It can not climb up the watercress plant. As a dicot, watercress grows from its tips, not from the base of the plant. In other words, the underwater part stays underwater, UNLESS the water level in your stream drops significantly. So, if you’re in the middle of a drought and the stream is lower than usual, play it safe with your watercress. But if the water level is consistent, and you harvest from an inch or two above water level, your raw watercress should be fluke free.

Don’t do anything that doesn’t feel safe to you. Cooked watercress is delicious, and if you only eat it that way, that’s swell. I’ve found watercress in places where I wouldn’t be comfortable eating it raw. I also have a clean, reliable watercress spot, and when I harvest there, I feel safe eating that cress raw. The decision is up to you…a responsible adult capable of making your own, well-informed decisions.

The assertive flavor of watercress lends itself to many dishes. It’s superb in a delicate tea sandwich on crustless bread with a skim of sweet butter. It spices up a green salad, and nicely offsets the taste of sweet ingredients like fruit or cultivated lettuces. Watercress soup can be served hot, cold, or room temperature and it looks as good as it tastes.