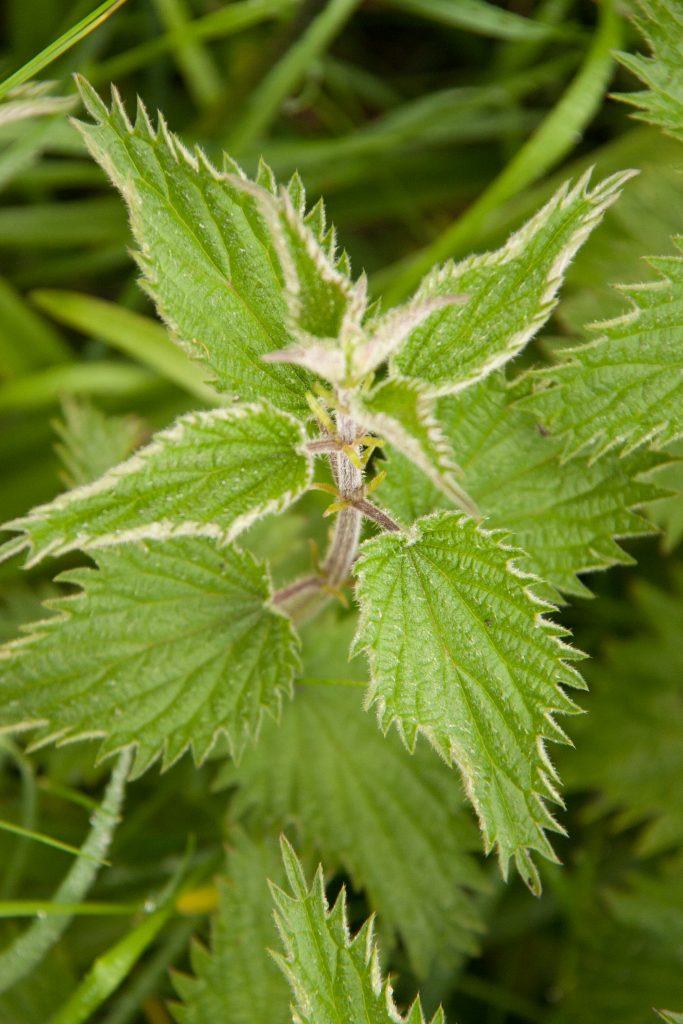 Before I ever saw a nettle, I felt its sting. I was walking through a grassy field with sandals on, and felt a sharp sting I thought might be a yellow jacket or red ant. When I looked down, I saw an unobtrusive plant, whose stems were covered with slim, innocent looking hairs.

My foot swelled up for a few hours; the redness and itching lasted a little longer. This didn’t curb my appetite for stinging nettles, although it did make me more careful in my pursuit of this tasty green. I’ve heard foragers claim to be able to pick nettles without getting stung, but I take precautions. And still I end up getting stung if I’m not paying strict attention or I’m focussed on some other wild edible. I don’t really mind. Because I know that after the sting comes the deliciousness.

There are several species of edible nettles. Of those, Urtica dioica is the most common. A subspecies, U. dioica subspecies gracilis, was once considered to be an entirely separate species but not any more. Its leaves are narrower than those of U. dioica, but it is still immediately recognizable as a stinging nettle.

Stinging nettle is a perennial plant that reproduces both by underground rhizomes and by seed. Nettles are most common in moist, shady woods and near streams, but you’ll also find them in sunny fields as long as there’s adequate moisture. They can grow to be two to six feet tall, and their leaves are pointy and roughly toothed. Nettle flowers are small and green, dangling in short chains from the leaf axils. The leaves roughly resemble mint leaves, but they have no smell and you definitely wouldn’t want to chew on a raw leaf! The stems and undersides of stinging nettle leaves are covered with tiny, hollow hairs (trichomes) that contain chemicals including formic acid and histamine. When these hairs are broken, they release their chemicals, which cause the infamous sting.

Nettles are most tasty and tender in spring, before they bloom. Use leather gloves (the stinging hairs easily penetrate soft cloth) to pinch off the top several pairs of leaves and stem, and harvest before the plant flowers. By the time the plant has bloomed, it’s usually tough and fibrous. You may hear rumors that mature nettles contribute to the formation of kidney stones or irritate the urinary tract. I’ve looked for peer-reviewed science to support this, but haven’t found any. However, since young nettles are tasty nettles, I have no problem sticking with the pre-flowering plants.

When you find a good nettle patch, visit early and often. By harvesting every one to two weeks, you can prolong the tasty season. Snipping off the top six to eight inches of the plant prevents it from producing flowers and lets you harvest for months instead of weeks.

Foraging tip: if you get stung by nettles, look around for dock. Mash up a few of the young leaves from the center of the plant to release the mucilage, then apply this to your sting. The swelling won’t go down, but the mashed dock should relieve some of the pain.

Good news: Nettle stingers are destroyed by cooking and drying! Some people dry the leaves, then grind them to make a powder which they use for tea or as a soup base. I think more flavor is preserved by blanching the nettles, which can then be frozen and stored for up to a year.

To blanch your nettles, bring a large pot of water to a vigorous boil, then add the nettles (using tongs!) and push them under the water. Boil the nettles for one to two minutes, then shock them (submerge in ice water) to stop the cooking. If you’re going to freeze your nettles, first eliminate as much water as possible by squeezing the cooked greens. No tool works better than your hands for this; grab your cooked nettles by the handful and give them a hard squeeze.

Stinging nettles reduce when cooked, much the same way spinach does. People compare the flavor to that of spinach all the time, but I think it’s darker and richer than spinach. Nonetheless, you can use cooked nettles in just about any way you’d use cooked spinach: frittattas, quiches, gnocchi, or malfatti. You can also make a rich, emerald green nettle soup or mini nettle pitas.

While some foragers claim to be able to eat raw nettle leaves, I’m pretty sure it involves some intricate origami folding process. Having been stung on the foot, arms, legs, and hands, I’m unwilling to risk the possible pain of being stung INSIDE MY MOUTH! If you must eat your nettles raw, run them through a juicer to get a highly nutritious and brilliantly colored  green juice, or use a blender or food processor to purée the nettles, then use them to make pesto or pasta filling.

Many nutritionists consider nettles to be a superfood. They’re rich in vitamins A and C, as well as calcium, iron, manganese, and potassium. But you know I don’t care about that. I love nettles because they taste so good.