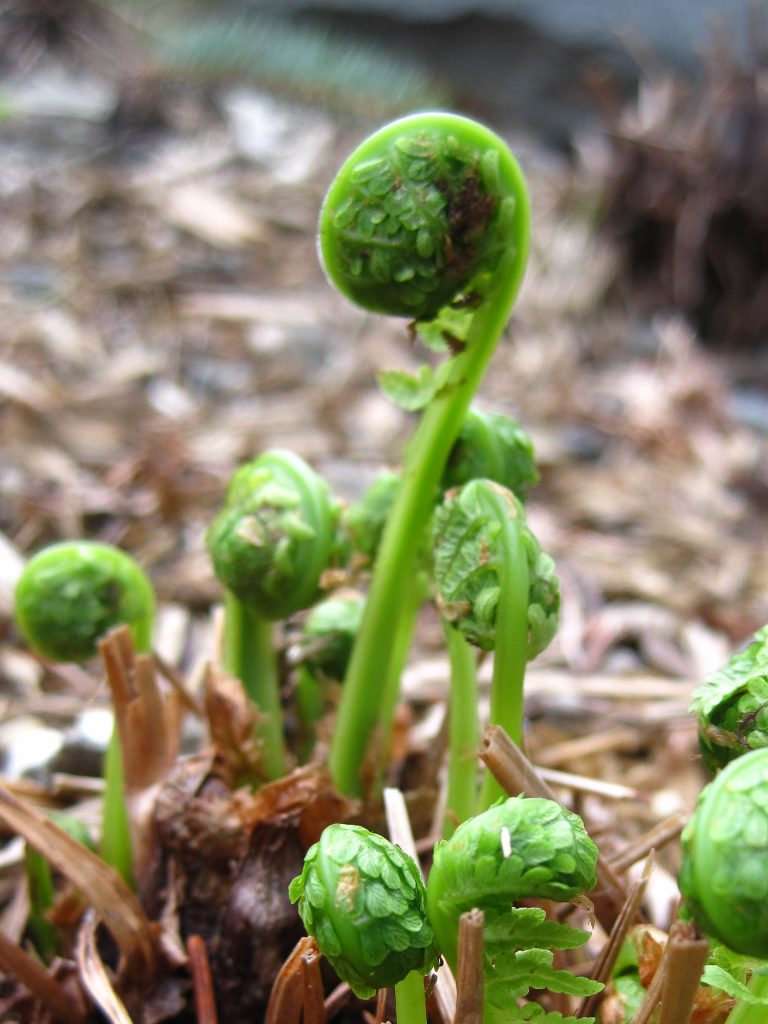 All fern fronds emerge from the ground tightly coiled, looking like the scroll on the top of the violin. (Hence the name fiddlehead.) But while all ferns begin as fiddleheads, not all fiddlehead ferns are equally tasty. The young foliage of ostrich fern (Matteuccia struthiopteris and Matteuccia pennsylvanica) is generally considered to be one of the most delicious ferns around, and ostrich fern is a graceful, easy plant for a shade garden.

So how can you tell which ferns are ostrich ferns? Ostrich ferns have brown, papery sheaths covering the emerging fiddleheads and an obvious, deep groove along the inside of a smooth stem. The sheaths are easily rubbed off, unlike the stubborn, wooly coverings of cinnamon fern (Osmunda cinnamomea), which is also quite bitter. These important i.d. characteristics (deep groove, papery sheath) will keep you from making an unpleasant culinary error.

When picking fiddleheads, harvest with care. Don’t take more than two or three unfurled fronds from any one plant. This leaves the fern enough foliage to support continued growth through photosynthesis. Also, only pick fronds that are tightly furled. Unfurled fronds are tough and fibrous.

Ostrich fern is easy to find in nurseries and garden centers, and since the plant has become endangered in some areas (due to non-sustainable wild harvesting), why not plant a clump or five in a shady section of your garden, then reap the benefits, both visual and culinary?

For hundreds of years, fiddleheads have been a traditional spring vegetable in the NE United States and Canada, and they are often eaten raw. However, in 1994, an outbreak of food poisoning in Canada and NY was traced back to a single supplier of fiddleheads.

Although ostrich ferns were thought to be the source of the outbreak, the species of fiddlehead was never actually confirmed. It is entirely possible they were not ostrich ferns at all. Or that the problem was in the preparation (canning) process, not in the fern itself.

If this makes you nervous, fear not. Health authorities agree that ostrich fern fiddleheads steamed for 10 – 12 minutes or boiled for 15 minutes are perfectly safe.

In New England and Eastern Canada, fiddleheads are often found in grocery stores, both canned and fresh. You can freeze your own fiddleheads if you have an abundant crop, or if your local market has a special. Steam them for 10 minutes, then freeze.

Try fresh steamed fiddleheads served over pasta with a little butter and a grating of parmesan cheese. The flavor is somewhere between green bean and asparagus. Ostrich fern fiddleheads make an excellent, stand-alone vegetable when cooked and topped with soy sauce or lemon juice. And if you’re feeling really self-indulgent, fiddleheads sautéed with garlic make a delicious topping for a goat cheese tart.