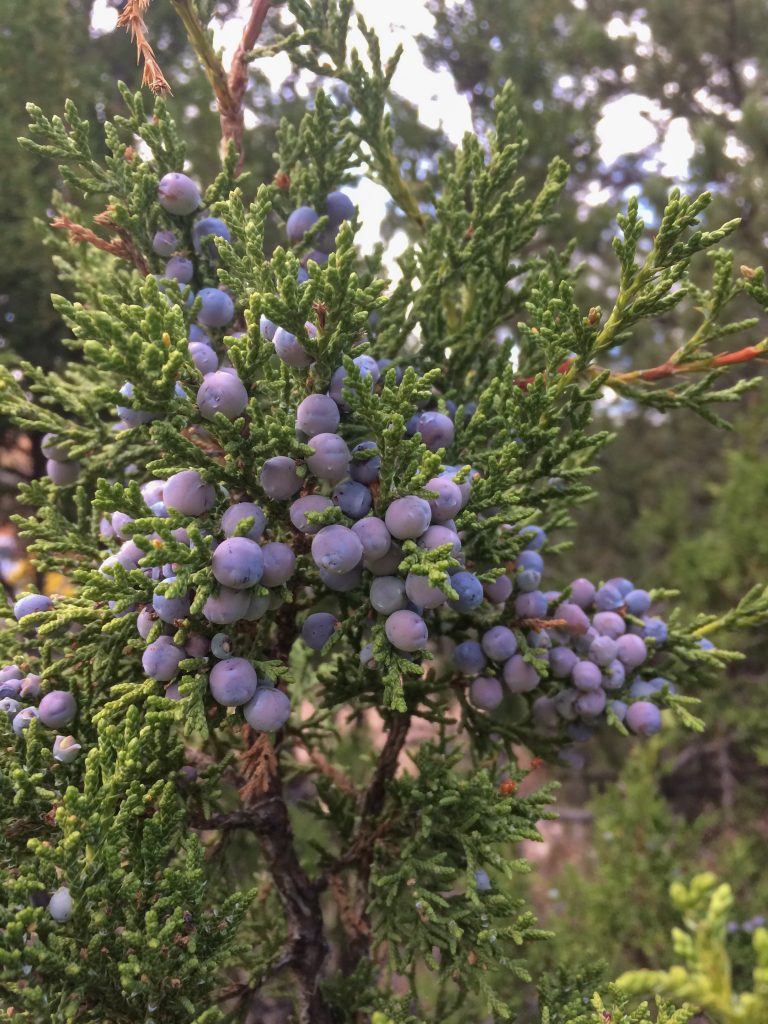 If you’ve ever tasted gin, you know what juniper berries taste like. The flavor is sometimes described as citrusy and evergreen, sometimes as reminiscent of rosemary. Juniper fruit has both bitter and sweet overtones. It’s complex, and useful for flavoring much more than gin.

Technically, juniper berries are cones, but they’re soft, fleshy cones, rather than the more familiar, hard, spiky cones. Since this isn’t a botany class, let’s just call them berries for the sake of conversation.

The fruit of common juniper (Juniperus communis) is generally considered to be the most flavorful juniper berry, but J. virginiana (eastern red cedar) also produces tasty, edible berries. These are the two most common species in the U.S.

Juniper fruit takes about two years to ripen, so it’s not unusual to find both green (unripe) and purple/blue (ripe) fruit on the tree at the same time. And while a ripe fruit makes an excellent trail nibble, an unripe fruit is intensely bitter and unpleasant. I use them to make cocktail bitters, but not for eating out of hand.

You can buy dried juniper berries in the spice section of a good market, but it’s so easy to harvest your own, you’d be crazy not to give it a try. Plus, who knows how long those store-bought berries have been sitting on the shelf? When you forage for your own juniper, you’ll know exactly how fresh and flavorful they are.

The flavor of fresh juniper fruit is juicy and complex. Dried berries aren’t juicy, but they are spicy and enticing. Fresh or dry, juniper berries have a strong flavor, so use them in moderation. Just a few berries, coarsely ground in a mortar with a pestle, are enough to flavor an entire batch of sauerkraut. They also make a great glaze for cookies and a super-simple fermented beverage called smreka.

I’m often asked if juniper berries are safe to eat, and there’s some controversy about this subject. If eaten in huge quantities over an extended period of time, juniper berries may be toxic. But don’t let this alarm you unnecessarily.

The same can be said of other common cooking spices. For example, consuming large quantities of cassia cinnamon gives you too much coumarin, which may harm your liver and kidneys. But no one warns you not to bake with cinnamon. Because the amount we use in baking is generally safe. In the same way, using most juniper berries as a flavoring in dry rubs and marinades is perfectly safe, unless you have a specific allergy.

There is one juniper (Juniperus sabina) that may be dangerous when eaten, but scientific literature on the subject is frustratingly incomplete. Studies have been made of both the bark and essential oil of J. sabina. The amount of essential oil estimated as harmful to humans is approximately one gram. Unfortunately, this doesn’t take body weight into account and that is clearly relevant. One gram of a chemical constituent is going to have a different effect on a 200 pound man than it will on a 70 pound child. But even if we accept the one gram figure, this is considerably more essential oil than you would get in a few berries. And humans aren’t grazing on juniper bark the way livestock is.

An FDA abstract says that the fruit of J. sabina has high concentrations of several potentially dangerous phytochemicals, but is inconclusive. Here’s how it ends:  “The quantity of toxic ingredients, sabinene and sabinol, in gin were unknown. Neither was anything known concerning their toxicity to man. In fact, no formal studies had ever been carried out on the chronic toxicity of these materials.”

J. sabina isn’t native to this country (although it may be sold as an ornamental), so in the United States you’re more likely to come across safe junipers like J. virginiana and J. communis if you’re foraging in the wild. I feel completely safe using the fruit of both of these plants in moderation. You, dear reader, will have to decide for yourself what you feel comfortable with. I hope you’ll taste a fruit before you decide.