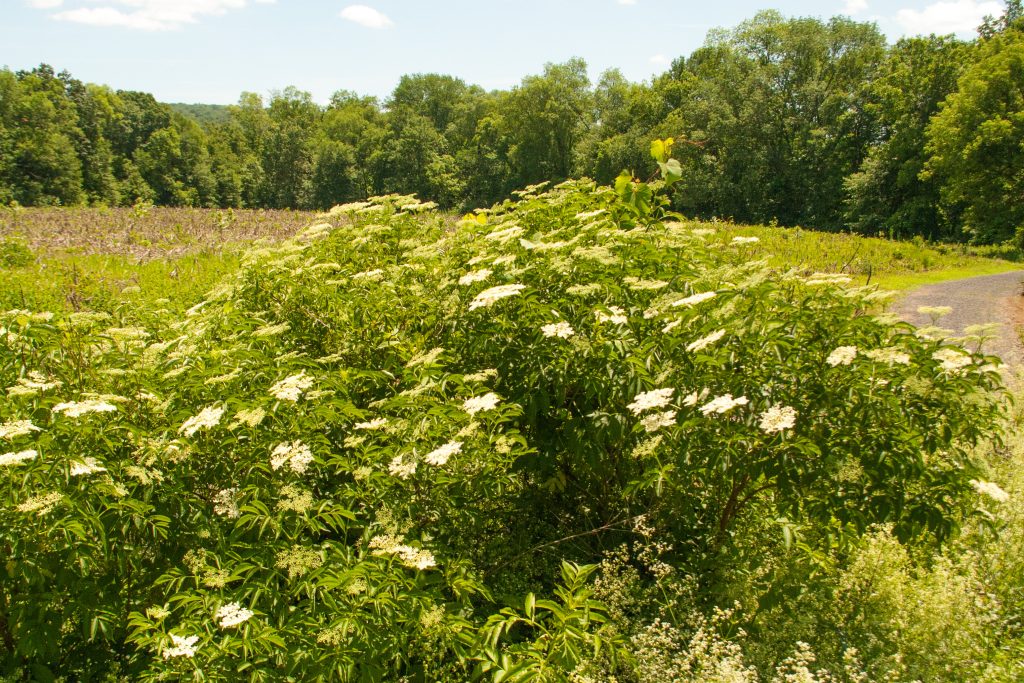 Some people call them elderflowers and others call them elderberries. For me, it depends on the season. Either way you look at it, the elder is a generous plant, producing two edible crops with excellent flavors. In spring you’ll find fragrant flowers, and in late summer, you’ll harvest clusters of deep purple fruit.

There are two general categories of elderberries: those with red fruit and those with blue/purple fruit. Red elderberries are often described as poisonous, although there is plenty of debate on the subject. However, I’ve never met a forager who said the fruit was actually tasty, so I’ll say no more about it here.

Several species of blue/purple fruited elderberries are not only safe to eat, but very tasty indeed. In Europe, Sambucus nigra is the dominant species. In the eastern two thirds of the United States, you’re most likely to find S. canadensis. Both these species have dark blue, almost black fruit and there is some controversy over whether they are separate species or varieties of a single species.

In the western United States, the most common species is S. caerulea and in the desert Southwest you’ll find, S. mexicana. Both species have blue fruit with a white bloom similar to that of grapes.

All elder shrubs have foliage that is pinnately compound, and that foliage is arranged oppositely on the stem. Elders grow best in full sun and moist, well-drained soil. They tolerate some shade, but flower and fruit less profusely with less sun.

All four of the blue/black elders mentioned above can be harvested and processed using the same methods. Only the flowers and ripe fruit are edible; all other parts of the shrubs contain cyanogenic glycosides, which, when consumed in large amounts, can result in cyanide poisoning. So don’t go around chewing on elderberry twigs and leaves, ok? Raw elderberry fruit contains smaller amounts of these same compounds but many people eat the berries without complaint, myself included. To be perfectly safe, cook your elderberries before eating them. They taste better that way anyway.

Feral (i.e. escaped from cultivation) elder shrubs can be large, sprawling plants, but garden cultivars are bred for interesting foliage color (purple, chartreuse) and smaller stature. Their flowers and fruit are just as tasty as those of the straight species, but since they’re bred primarily for their beautiful foliage, they often produce fewer blooms and less fruit.

Collect the clusters of white flowers (some cultivars have pink blooms) when they are fully open but before they start to turn brown. Flowers that are even slightly past their prime may have a  musty flavor. And don’t gather flowers immediately after a rain. Elderflower pollen contains natural yeast that’s useful in fermenting elderflower champagne; this will be washed away in a storm. And of course, if you want to harvest elderberries later in the season, you’ve got to leave some flowers behind for the bees to pollinate and fruit to form.

Elderflowers are traditionally used in fritters, made by holding the flower cluster by the stem, dipping it in batter, frying it, then dusting the whole thing in powdered sugar. I think this is a waste of the elderflower, whose flavor is obscured by the taste of batter, fat, and confectioner’s sugar. I have nothing against sugar and fat, but I prefer to feature the flavor of the elderflower itself.

Elderflower champagne is a light, bubbly, barely alcoholic beverage, perfectly refreshing on an early summer day. It’s a great way to feature the flavor of the flower. Elderflower syrup  can be used as the base for beverages (both alcoholic and non-alcoholic), ice creams, and sorbets. Elderflower liqueur (think St. Germain) is a popular cocktail ingredient you can buy off the shelf, or make at home, if you have an especially bountiful elderflower harvest.

The season for elderflowers is brief, and early summer rains may make it difficult to find flowers with yeasty pollen, but it’s definitely worth trying. To me, it’s not summer without something that tastes like elderflowers.