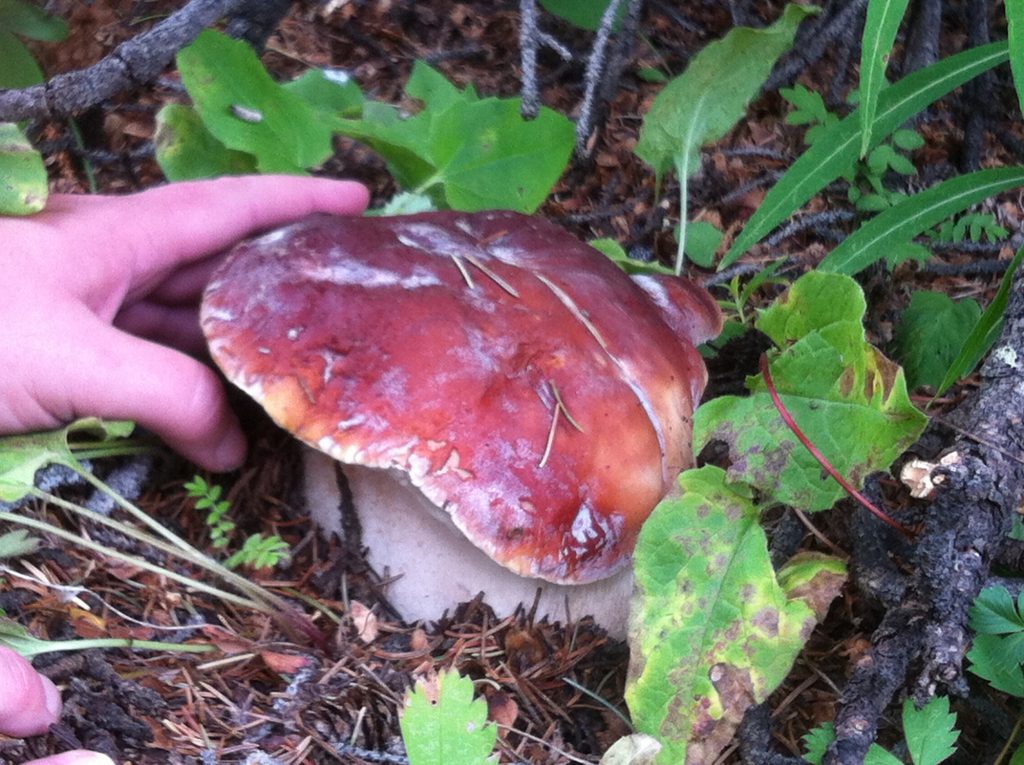 Boletus edulis is known by many names: porcini, cep, penny bun, steinpilz, and king bolete, to name a few. Whatever you call it, it is one of the most delicious and desirable edible mushrooms in existence. It’s no wonder serious mushroom hunters keep their special spots secret, checking them every few days during porcini season so as not to miss a single, precious mushroom.

The timing of porcini season depends on where you hunt. Generally, mushrooms flush after rains and the two most prolific porcini producing regions in the U.S. are the Rocky Mountains (usually in late summer) and the Pacific Northwest (spring and fall). In dry years, even normally productive porcini spots may produce nothing at all.

Boletes are identified by their spongy underside. Unlike gilled mushrooms (which have gills on the undersides of their caps), boletes have a spongy mass composed of small tubes containing the mushroom spores. We call them pored mushrooms because of the pores visible on the spongy surface.

There are many different kinds of boletes, some tasty, some bitter, some causing stomach upset. The king bolete is a safe and delicious bolete, identifiable by its brown to reddish-brown cap, its thick, cream-colored stipe (the name for a mushroom stem) often as wide as the cap itself, and the delicate, white pattern of netting at the top of the stipe. The flesh of the king bolete does not stain blue when cut. Its spongy layer is white when young, and turns yellow with age.If you find one with a green, slimy sponge layer, it’s too old to be tasty.

Sometimes you’ll hear people refer to The Porcini Complex, which refers to several, closely related boletes, including B. edulis, B. rex-veris (the spring king of the PNW), and B. rubriceps. Rubriceps is Latin for red cap, and indeed, this variety usually has a redder cap than B. edulis. It grows primarily in the Southern Rockies.

You’ll often find Porcini pushing up through layers of dried evergreen needles, creating what we lovingly call “mush-humps.” These boletes most often grow in conjunction with conifers like spruce, fir, and sometimes pine. The mushrooms have a mycorrhizal relationship with these trees, which provide carbohydrates to the fungi. In turn, the fungi extend the trees’ ability to absorb water and nutrients. It’s a beautiful thing. It also means that porcini are difficult to cultivate since the complex relationship between fungus and tree root is essential. In order to preserve this mycorrhizal relationship in nature, it’s important to harvest your porcini carefully. Gently dig your fingers into the soil at the base of the stipe and lift the entire mushroom. Leaving a piece of the stipe behind may lead to rot and kill some of the mycelium (the fungal equivalent of an underground root system).

King boletes dry spectacularly well, and many mushroomers swear drying concentrates and improves the flavor and fragrance. A full jar of dried porcini smells rich and complex, almost smoky. They rehydrate easily in warm water after a 20-minute soak. Dried porcinis are superb in risottos, sauces, and pastries. If you’d like to enjoy the full meaty texture and flavor of a fresh specimen, try roasting them in miso garlic butter for an unparalleled treat.