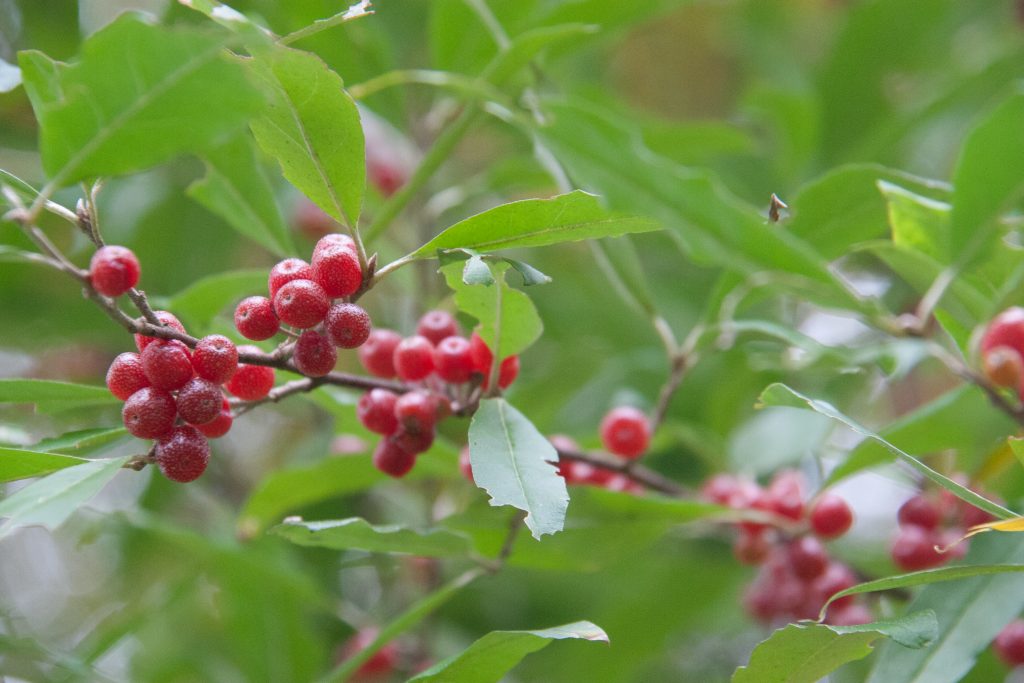 If I were a farmer I might curse this invasive plant. But as a forager, I look forward to its generous annual fall crop of fruit. Autumn olive was brought to the U.S from Japan in the 19th century, and it did so well here that in the mid-1900s the U.S. Soil Conservation Service recommended it as a windbreak and for erosion control. Oops!

Birds love autumn olive fruit (almost as much as foragers do) and they do an excellent job of dispersing the seed, which germinates in all kinds of adverse conditions. This plant has another advantage: it’s a nitrogen fixer, which allows it to thrive in poor soils. And the Missouri Botanic Garden tells me that a single plant can produce up to 80 pounds of fruit and up to 200,000 seeds. For all of these reasons, feel free to harvest as much silverberry as you like. You will not make a dent in the population, and there will still be plenty left for all kinds of wildlife (including other foragers).

It is astonishingly easy to harvest vast quantities of fruit, just by running your hands down the stems of the plant, but watch out for the thorns. Some foragers lay a tarp at the base of a shrub and shake the fruit off…a smart way to avoid injury and insure that only the truly ripe fruit goes home with you. Autumn olive is listed as invasive in many states east of the Mississippi.

Let’s take a moment to discuss its common names. I prefer Silverberry or Autumnberry to Autumn Olive (its most common common name) for several reasons:

Silverberries usually ripen in September and October, depending on where you forage. Fruit looks ripe long before it actually is, and unripe fruit is quite astringent, so taste a berry or two before you fill your foraging bags. Ripe fruit will still have a sour edge, but it will be pleasant rather than puckering.

Silverberries are high in vitamin C and lycopene, and they’re tasty raw or cooked. The seed is large relative to the size of the fruit, so you’ll want to spit that out if you eat silverberry as a trail nibble. But don’t spit it out on the ground because then you’ll be doing what the birds do, i.e dispersing the seed!

Silverberry juice makes an excellent jelly, and can be substituted for lemon juice in a meringue pie. Or, run the fruit through a food mill and use the pulp to make a pretty quick bread using your favorite banana bread recipe.