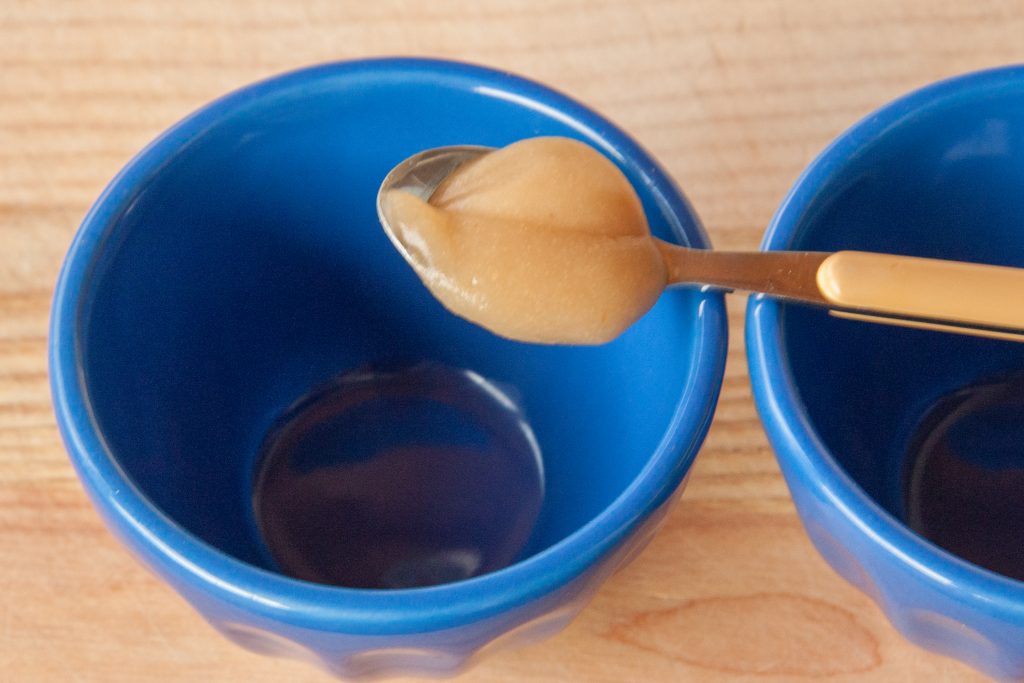 As I foraged through the freezer on this snowy morning, I found a bag of pears harvested a few months back. Lots of fruit trees line the streets of my neighborhood, yet no one seems to pick the fruit. I’m not about to let those apples, apricots, plums, and peaches go to waste; I harvest on my morning walks. And this morning, I turned my suburban-foraged pears into a delicious wild-spiced pear butter, using some of my favorite foraged spices.

I use a crockpot for this because it means I can walk away and not worry about burning the fruit, but you can certainly make pear butter in a pot on top of the stove. Just keep the flame low, and give it a stir every once in a while. When it comes time to smooth out the fruit butter, I transfer mine to the Vitamix, which never lets me down. You could also use an immersion blender or a food mill, but I prefer the blender because it really pulverizes the pears, which have a slightly gritty texture. The Vitamix doesn’t get rid of all the grittiness, but it does produce the smoothest pear butter I’ve ever made.

So what’s the deal with the grit? That little bit of roughness you feel between your teeth is a sclereid (aka stone cell). Other fruits (like quinces and guavas) have them too, but they’re most noticeable in pears, I think. Sclereids have very thick cell walls made of lignin, which is the same material that forms the hard pits of peaches and apricots. Stressed pear trees will produce fruit with more sclereids, which is why foraged pears are usually grittier than commercially grown fruit. Feral trees and street trees don’t get the same regular water and care that orchard trees get.

I like to just barely sweeten my pear butter. That way I can eat it as a guilt free dessert on its own. I also add it to glazes and marinades, and swirl it into yogurt. I’ve sweetened it with brown sugar, honey, and maple syrup, but this time I used birch syrup from my friends Melissa & Sam. It’s the perfect sweetener for pear butter, adding a little bit of tanginess in addition to sweetness. I also spiced it up with a tea ball full of my favorite wild spices: spicebush berry, sassafras twigs, and wild ginger stolons. Feel free to play around with the sweetener and spices as you see fit.

What You’ll Do to Make Wild-Spiced Pear Butter

You don’t really have to peel your pears, but doing so may reduce the grittiness. The concentration of sclereids is heavier in the skin than in the fruit’s flesh. Sometimes I peel, sometimes I don’t. Either way, put your prepared pears in the bowl of a crockpot and turn it on to low. If your pears have been previously frozen, you may not need to add water, as the fruit will have released a lot of juice. If the pears are fresh, add a few tablespoons of water to prevent scorching.

After about an hour, add a tea ball filled with your spice mix to the crockpot, and stir the pears to cover the spices. Turn your crockpot up to high. You might also give the fruit a mash at this point, although it will still be pretty hard. Check back every hour to give a stir and if the fruit is boiling heavily, reduce the temperature to low.

After four hours, remove the spices, and transfer your fruit to a blender. Pulverize the fruit until it’s as smooth as silk, then taste it. You may decide you don’t want to sweeten it at all, especially if you plan to use it later as a base for sorbet, ice cream, pie filling, or marinade. If you want to eat it straight out of the jar, you’ll probably want a little added sweetener. Start by adding a teaspoon to the blender and give it a few pulses. Taste again and if it’s not sweet enough for you, gradually add more sweetener, blending after each addition until you are content.

Fruit butters should be thick, smooth, and spreadable. Therefore, they require longer cooking than a fruit sauce. If your pear butter is on the thin side, transfer it to a pot, and continue to cook it over low heat on the stove, until enough liquid has cooked off that it will hold its shape on a spoon.

This wild-spiced fruit butter will keep for several weeks in the fridge, or you can process half pint jars in a boiling water bath for ten minutes.

P.S. If you’d like to learn more about wild spices, check out my online course: The Wild Spice Cabinet.