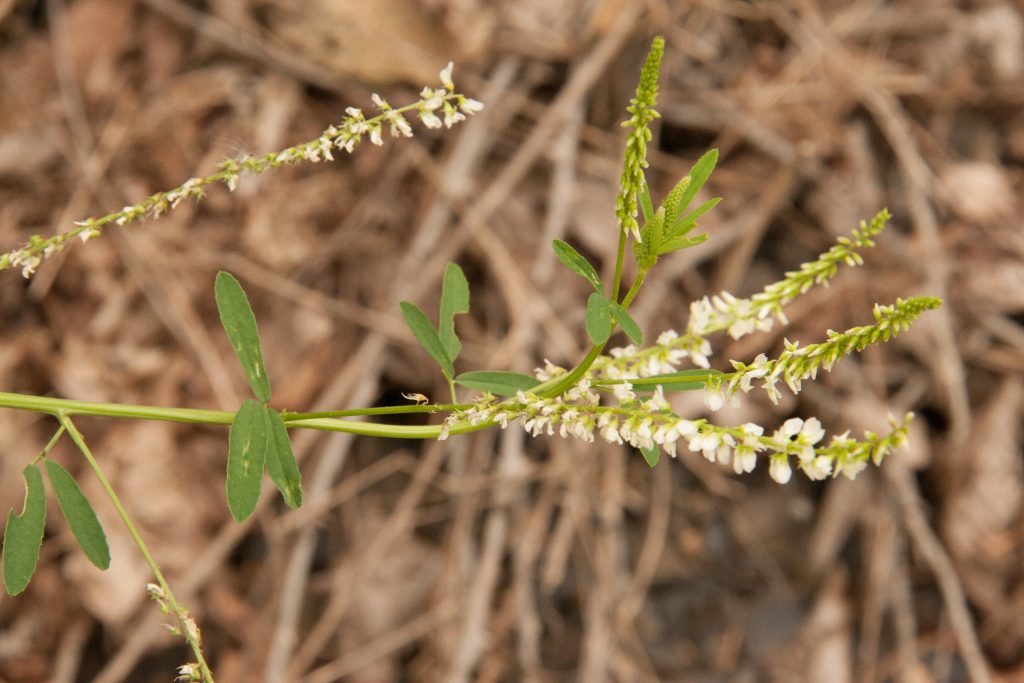 Don’t be fooled by the common name of this plant. This is not the low-growing clover you find in your lawn with round pink or white flowers. Melilot is a tough, drought tolerant, biennial plant that can grow to be four feet tall. It’s a common roadside weed that thrives in dry, neglected spaces. Melilotus officinalis has yellow flowers and M. albus has white flowers. There is some question as to whether these are actually two separate species or varieties of the same species. I happily use both and find the flavors to be identical.

A member of the pea family, Melilotus has the three-lobed leaf typical of legumes. Both the foliage and flowers have a sweet, vanilla fragrance with overtones of hay. It’s considered invasive in most parts of the United States and often appears in giant swaths. Which means you can forage for this herb to your heart’s content.

Melilot can be used fresh or dried, but the flavor is intensified by drying. Some foragers think the fresh herb is bitter, but I disagree. I’ve used fresh melilot to make syrups and been very pleased with the flavor; it’s just slightly more delicate than the dried herb. I use both the flowers and leaves of the herb, stripping them off the thick stem before using.

Melilot contains coumarin, which is responsible for its sweet, hay scent. When melilot gets moldy, the coumarin converts to dicoumarol, which is an anticoagulant. Please don’t be alarmed. Coumarin is not considered a carcinogen by OSHA and anyone who has eaten cassia cinnamon has eaten coumarin and lived to tell the tale. Coumarin is also present in strawberries, apricots, and cherries.

It is only when certain fungi interact with the coumarin, converting it to dicoumarol, that consumption may be dangerous. So, dry your melilot carefully, and if you see any signs of mold on the plant, throw it away! I strip the leaves and flowers from the stems and dry them in a dehydrator at 95F. If you’re air drying your melilot, bundle and hang the stems, then strip the leaves and flowers after they’re dry. It’s easier that way.

I use crumbled, dry melilot on chicken, pork, and fish. Try substituting it for tarragon in savory dishes. It doesn’t have exactly the same anise flavor, but it works well in recipes that traditionally call for tarragon. I’ve also infused it in cream (instead of vanilla) as a base for blancmange, and made a melilot simple syrup that makes an excellent cocktail ingredient. I’m just getting started with melilot and the end is nowhere in sight.

Previous Post: « Verjuice: How to Make A Local Lemon Juice Substitute
Next Post: All About Milkweed (Asclepias syriaca) »