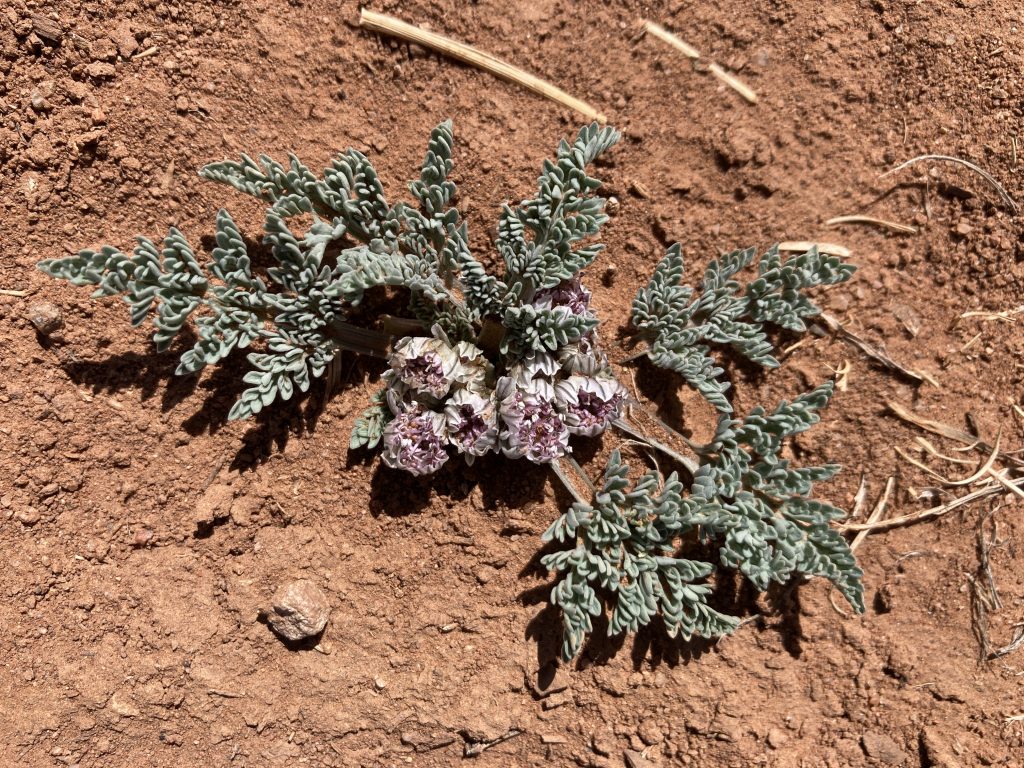 Growing up in the Northeast, I’m used to the idea of ephemeral plants, i.e. plants that emerge in spring, take advantage of the moisture and light (before the deciduous trees leaf out), do their business (flower, fruit, and set seed), then hibernate from the heat of summer through the end of the year. I haven’t found nearly as many ephemeral plants in New Mexico, but now I’m getting to know Cymopterus, an edible ephemeral native to the American Southwest.

I found this plant for the first time last spring, when we were camping up by the CO-NM border. I wasn’t sure what it was, so all I did was take a few photos and do some research. I thought it might be a Lomatium but Sam Thayer suggested Cymopterus montanus when I sent him photos of both the plant and the habitat.

So THIS spring, when I found them in similar terrain, I dug a few roots and brought them back to the kitchen. I’m not sure whether this is C. montanus or C. bulbosus, and I don’t really care since both are edible. Still, I’ll probably key it out at some point. There is frustratingly little information about these plants in the foraging literature. Maybe because it’s regional in nature, or maybe because it’s ephemeral. Either way, I want to learn more!

Cymopterus is in the plant family Apiaceae, which includes the familiar Queen Anne’s Lace as well as the toxic poison hemlock. (We don’t mess around with Apiaceae.) Fortunately, all Cymopterus are edible, although the flavor varies from species to species. These are low-growing perennials with finely cut, compound gray-green leaves. Foliage is tripinnately compound, and the leaflets often curl up at the edges. Flowers may be yellow, white, or purple, depending on the species. Cymopterus is one of the earliest plants to emerge in spring, and only sticks around for a few months so the harvest season is short. Depending on where you forage, you’re likely to find it from mid-March to mid-May, in dry, sunny spots.

Lomatium and Cymopterus are sometimes grouped together into a category called biscuitroots. The roots of most species in these two genera are large and starchy and have historically been used as a carbohydrate source by native peoples. They can be eaten raw or dried and made into a flour. I experimented with making flour from the roots of two different Lomatium species, and found it extraordinarily bitter. Not un-usable, but not delicious, even after many leachings. I figured I should make biscuits from biscuitroot, but even with a half/half blend with all-purpose flour, the biscuits were noticeably bitter. Thomas Elpel, in Foraging the Mountain West, says he has rarely found a tasty Lomatium root. It’s nice to know I’m not alone.

Because I didn’t love my Lomatium experience, I only harvested a few Cymopterus roots. I didn’t want to waste them if they weren’t palatable. I made sure to harvest both flowering and not-yet-flowering plants so I could compare flavors. Washed and peeled, the roots of both flowering and not-yet-flowering plants were very tasty raw. The flavor and consistency reminded me of celeriac, with some natural sweetness. It would work well in a salad or crudité platter.

So what to do with the rest of the roots? I wanted something more interesting than biscuit flour, and after about an hour online I found a reference to a traditional liqueur, specific to northern New Mexico that uses Cymopterus root.

An adult beverage with a foraged main ingredient? Sign me up!

Mistela de Chimaja* translates to Chimayo whiskey, although apparently it can also be made with tequila. So now, infusing on my countertop is a large mason jar of local whiskey (Santa Fe Spirits) with chimaja root, piloncillo, orange peel, and cinnamon stick. I’ve read it’s an acquired taste, but I have to disagree. Even though it needs to sit for a few more days, I think the flavor is great. Next time I’ll try substituting a few foraged ingredients for the cinnamon and orange, but I wanted to try the traditional recipe, first time out.

The leaves of Cymopterus are often harvested, dried, and used as an herb, especially in traditional Southwestern bean recipes. Another common name for the plant is spring parsley, but to me the flavor of the fresh leaves is much stronger and more bitter than the flavor of parsley. It’s not altogether unpleasant, but it’s a strong flavor that I suspect will be better as an accent than eaten fresh and whole on its own. I’m drying the leaves from the roots I harvested, and will experiment with them soon.

If anyone reading this has experience with Cymopterus, please let me know. I’m eager to learn more about this fascinating ephemeral edible.

* In his book Southwest Foraging, John Slattery lists chimaja as one of the common names for Lomatium. You’ll also find it used as a common name for various Cymopterus species. That’s the problem with common names…don’t get me started.