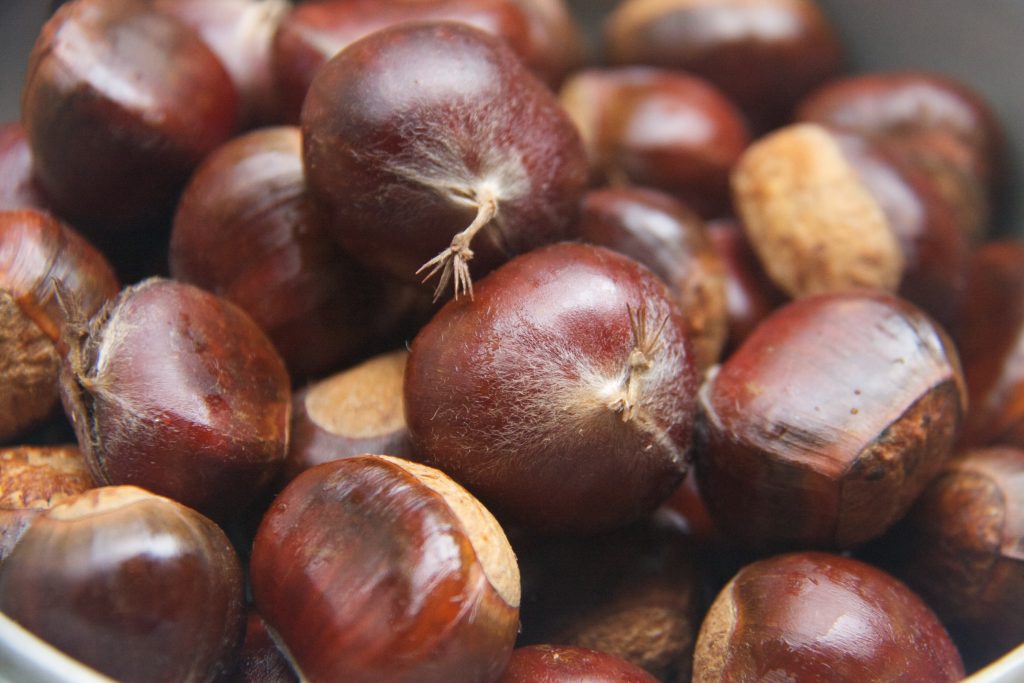 Early in the 20th century, chestnut blight was unwittingly introduced to the United States, with the importation of Asian chestnut trees by the Bronx Zoo. American chestnut trees (Castanea dentata) had no resistance to this fungal disease, and it quickly devastated the American chestnut population. Chestnut blight doesn’t kill the whole tree, but it does kill the top growth. Trees may re-sprout repeatedly from the roots, but they almost never get mature enough to bear fruit.

Chestnuts in the Wild

If you happen upon mature chestnuts in the woods today, they’re probably feral, Asian chestnuts. And while they may not be as sweet and delicious as our native chestnut is rumored to be, they’re still worth foraging for. Humans aren’t the only animals that appreciate ripe chestnuts; you’ll need to get to them before the squirrels, raccoons, bears, and deer. As nuts ripen in early to mid fall, the green, spiny, outer casing opens to reveal the nuts within. This is the perfect time to harvest, while the open fruit is still on the tree. Shortly thereafter, the fruit falls from the trees and the early forager gets the chestnut. It may be you, it may be Bambi. I encourage you to be first in line.

In addition to chestnut blight, chestnut lovers should be aware of the chestnut maggot. A small hole in a chestnut indicates that a larva has crawled out of the nut, and burrowed into the ground to overwinter. The good news is that the hole indicates the maggot is gone. The bad news is that a nut without a hole may, or may not, have a maggot inside.

Chestnuts in Your Kitchen

If you have time to process your chestnuts right away, look for bugs and remove them. If you don’t have time to cook with your chestnuts right away, store them in the freezer, lest maggots exit the nuts onto your kitchen counter. When you thaw them, clean out any frozen insects, unless you crave the extra protein Make an X on the flat side of each nut with a serrated knife.  (The serrated edge gives you a better grip on the nut.) Place the chestnuts on a cookie sheet and roast them for 25 minutes at 400°. Opening the skin of the nut allows steam to escape during roasting, and prevents the chestnuts from exploding in the oven. The skin peels back from the X and comes off easily when the nuts are still warm. Peeling becomes more difficult as the nuts cool. You can zap them in the microwave to re-warm them and make the peeling easier.

Before you try chestnuts in a recipe, try eating them plain. They’re moist, rich, and dense. Sort of like a mini dessert potato.

Roasted chestnuts are a classic stuffing ingredient. They also make a wonderful savory soup and a sweet, light mousse. And because chestnuts contain more starch than any other nut, they are often served as a vegetable (hence my earlier potato reference) or ground into flour. And once you’ve made chestnut flour there’s no telling what you’ll make: polenta, pasta, pound cake…so many possibilities.